A summer to remember for junior golfer Keaton Gudz 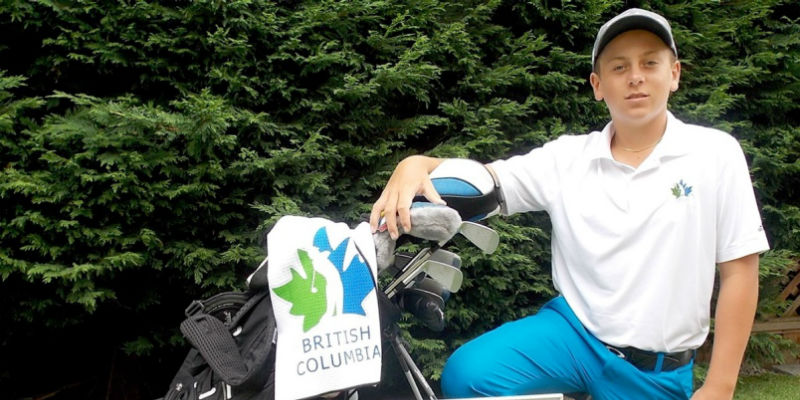 When Keaton Gudz goes back to school, the 15-year-old is going to have a wonderful story to tell of how he spent his last few months.

It involves winning not one, but two prestigious golf tournaments and several other top finishes as the Grade 10 Spectrum student claimed top honours at the B.C. Junior Championship in early July and the Canadian Junior Golf Association Mizuno National Championship a month later.

“It’s been a good summer,” Gudz said Friday morning after returning from a fifth-place finish at the B.C. Juvenile Championship in Chilliwack. “I worked hard in the off-season this winter and gutted it out on the [driving] range.

“I expected to play better, but I didn’t expect it to be this good,” admitted Gudz, who headed out to Uplands Golf Club in the afternoon for the Zone 5 Junior windup where he would be named junior boy’s player of the year. Naomi Ko of Victoria took the girl’s honours.

Both are members at Royal Colwood.

Along the way, Gudz also competed through the local Vikes Tour; placed fourth and sixth at a pair of American Junior Golf Association events in Texas; finished 18th and fourth, respectively, at the CN Future Links Pacific and Prairie Championships; ninth at the B.C. Summer Games in Nanaimo and 32nd at the Canadian Junior as a member of Team B.C.

Try to cram all that on the first page of your new scribbler.

Next week, Gudz, who also plays out of Highland Pacific where he is coached by Rob Cruise, is off to Calgary for a Golf Canada development camp and then he flies to Ontario for a CJGA Team Canada Junior Challenge in Collingwood to compete in an international field.

This all comes as he enters Grade 10, which will be split between Spectrum and the Canadian Sport School at PISE.

Obviously, talk of scholarships will soon be coming his way.

“I’ll start sending out emails to schools later this year.”

And judging by the summer he’s had, there should be plenty of replies.

Winning the B.C. Junior was a welcomed surprise for Gudz, who gave up a few years to most of his competitors.

“I was just trying to make the cut to see how I could play.

“I turned in some good rounds, ended up in contention and pulled it off,” he said of his rounds of 70, 76, 67 and 70 at Meadow Gardens Golf Course in Pitt Meadows.

Gudz rolled in a five-foot birdie putt on the final hole to pull out the win by that single stroke over Trevor Yu of Vancouver and Curtis Chan of Richmond.

Gudz, making his first appearance at the B.C. Junior, was tied with Yu with one hole to play and finished at 5-under 283.