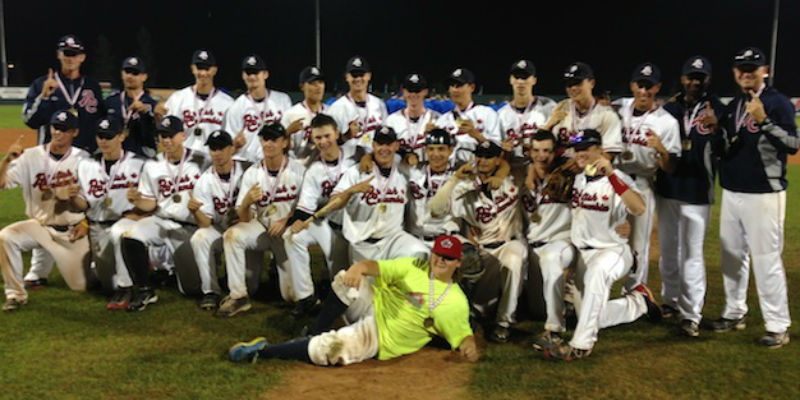 OTTAWA- Kyle Ross (Maple Ridge, BC) came within one out of a complete-game shutout, but in the end the gold medal was all that mattered as he led BC to a 5-1 victory over Alberta to win the Baseball Canada Cup.

Ross was dominant through six and two-thirds innings allowing only one earned run, three hits, four walks, while striking out six batters. He was removed from the game after allowing a run with two out in the top of the seventh in favour of Matteo Vincelli (Burnaby, BC) who struck out the only batter he faced to end the game.

Trevor Loftstrom (West Kelowna, BC) scored the games first run in the bottom of the second after Alberta starter Nick Vickers (Calgary, AB) issued a two-out walk with the bases loaded.

Vickers put up a valiant effort for Alberta holding BC scoreless in the third and fourth frames before allowing a two-out double to Tanner Rempel (Abbotsford, BC) who later scored the eventual game-winning run on a single from Tom Melenchuck (Surrey, BC).

BC went on to add three runs in the sixth before Alberta broke the shutout bid with a two-out single in the seventh off the bat of Matt Purschke (Stony Plain, AB).

Hugo Brochu (Montréal, QC) limited Saskatchewan to just three hits and allowed just one earned to lead Québec to a 9-2 win and the bronze medal. Brochu went six innings before giving way to Justin Deroy-Dunn (Val des Monts, QC) who tossed a scoreless seventh. After getting behind 1-0 in the first, Québec scored twice in the second before adding four runs in the third. Luca Portolese (St-Leonard, QC) had two doubles and knocked in three runs to pace the Québec offence, while Matthew Chiz (Pointe-Claire, QC) went 2-for-3 and scored three runs. Host Saskatchewan went unbeaten in pool play before falling to BC in the semi-finals and Québec in the bronze medal game to finish in fourth place.

In semi-final action, BC’s Josh Burgmann (Nanaimo, BC) went six strong innings allowing one run on five hits and a walk, while fanning six to lead BC to a 3-1 win over previously undefeated Saskatchewan and a spot in the gold medal game. Geoff Ehresman (Vancouver, BC) had a RBI double, while Lenn Nakatsuka (Nanaimo, BC) and Tom Melenchuk (Surrey, BC) also drove in runs. Saskatchewan’s Dolan Kunkel (Saskatoon, SK) was tagged with the loss although he went six innings and struck out five.

Alberta’s Kurt Meeberg (Edmonton, AB) pitched a complete-game six-hitter, giving up two runs and striking out four to lead Alberta to a spot in the gold medal game with a 5-2 win over Québec. Sean Robbins (Edmonton, AB) and Nick Vickers (Calgary, AB) each contributed a double and one RBI to Alberta’s offence. Isaac Deveaux (Montréal, QC) had two doubles and scored one of the Québec runs in the loss.