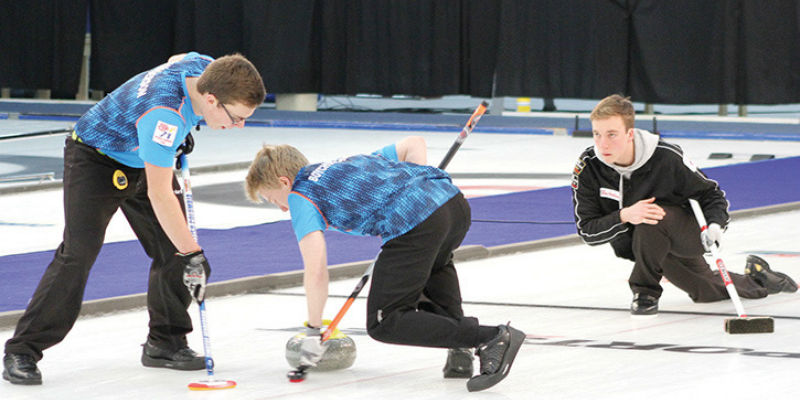 Team Tanaka advanced directly to the final thanks to a 6-1 record in round-robin play that included a 6-4 win over Henderson three days earlier.

The Island rink stole three in the opening end but Tanaka answered with a superb draw to secure a point and the game was eventually tied at 5-5. Team Henderson then took three straight ends to lead 9-5 before Tanaka pulled two back. In the 10th, Henderson successfully cleared one of two Tanaka stones in the house to secure the victory.

He became the fourth rink from the Victoria Curling Centre to take the provincial title in as many years.

our mettle against some of the best young teams in Canada,” said Henderson.

It was Tanaka’s first-ever appearance in a provincial final. He and Mackintosh led South Delta to bronze at the 2012 provincial high school championships. They would later leave Tunnel Town to team up with Fraser Valley curlers, something

that is very common to be able to compete at the provincial level.

Another former Tunnel Town standout came close to making the playoffs in the provincial junior women’s playdowns which also took place in Parksville.

Shawna Jensen’s rink finished fourth in round-robin play with a 4-3 record, one game back of the final playoff spot.

The difference proved to be a 7-5 loss to Mariah Coulombe in her last round-robin game, giving the Victoria rink third place with a 5-2 record.

After curling with a Victoria based team last season, Jensen paired up with curlers from the Juan de Fuca and Power River Curling Clubs – Katherine Silversides (third), Michaela

Jensen skipped South Delta to gold in her Grade 12 year at the 2012 provincial high school championships.

Meanwhile, it was also a close call for Delta Thistle’s Team Daniels as it fell 8-2 to Team Brown from Kamloops in the women’s final.

Daniels went unbeaten in roundrobin play to reach the championship game but fell behind early and never could recover.

“After losing to Team Daniels in round robin play, we knew it would take our A-game to have a chance at the title,” said winning skip Corryn Brown. “Our goal going in was to have a good team game as a whole and get off to a good start. We were fortunate to get a few steals early on and it was a well-played game by both teams, we just happened to come out on right side of things. I am so proud of how we played as a team and we have the utmost respect for Team Daniels and their playing abilities.”

Skip Sarah Daniels won’t be going to nationals but she will be representing B.C. at next month’s Canada Winter Games in Prince George, along with teammate