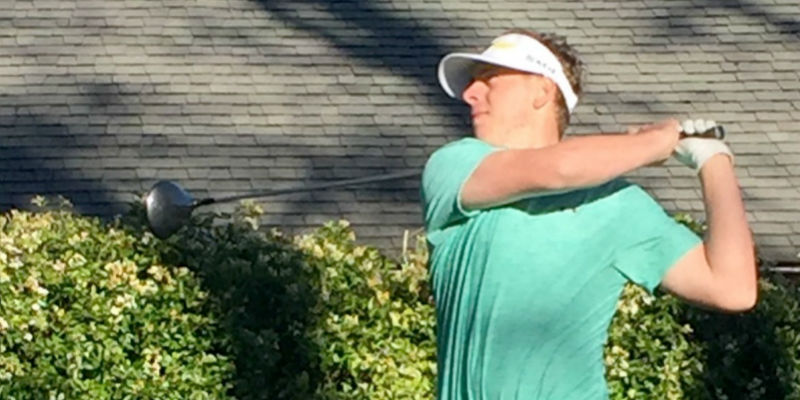 After a runner-up finish a year prior, Riley Wheeldon and Keaton Gudz bounced back for a four-shot victory in the 2017 Vancouver Island Open.

The twosome followed up an impressive 11-under 61 on a rainy Saturday afternoon at Gorge Vale with a 5-under 65 on a blustery Sunday at Uplands Golf Club in the team event. Wheeldon and Gudz were two shots in arrears to Kevin Carrigan and Craig Doell in 2016.

“Coming back this year, I was really stoked that Riley could make it. It was some nice revenge,” admitted Gudz, a Royal Colwood junior who has had a successful start to the year. “Riley played spectacular at the Gorge. I was just there to help him out on a couple of holes, but he did most of it himself.”

The duo finished with a 126 total, ahead of Saare Adams and Jade Dennill in second at 130 after they recorded the low round of the day on Sunday with a 63. Dylan Bell and Darren Day Jr. were third with rounds of 66-65. Eric Wang and Isaac Weintraub were a shot back in fourth (67-65) and Carrigan and Doell one more stroke behind in fifth (69-64).

“Saturday was fun, it was one of those days,” said Wheeldon, of Comox, who shared in the $1,200 top prize. “We got it going early. We were 7-under as a team on the front nine and once you get under par like that everything seems easier.

“I love playing with Keaton, too. He has a lot of talent and a bright future. It kind of brings me back to five or six years ago when I was in the same situation. It makes you enjoy the game,” he added.

As does winning the prestigious title, after coming so close the year prior.

“We were looking for some redemption,” admitted Wheeldon. “Last year was a good battle against Craig and Kevin, and on Saturday we were playing with them again and we came in with a little extra motivation and played really well.”

Despite a tricky second day in which the wind caused some havoc at Uplands.

“With the big trees here at Uplands, the wind can get pretty swirly. Sometimes you think you’re down wind and it ends up being into the wind, which makes it tricky,” said Gudz.

Jim Goddard and Jim Rutledge topped the senior open division of the event with rounds of 68-66 for a 134 total while Jon Barron and Ron Wickett teamed up for the net amateur title with net scores of 66-59.