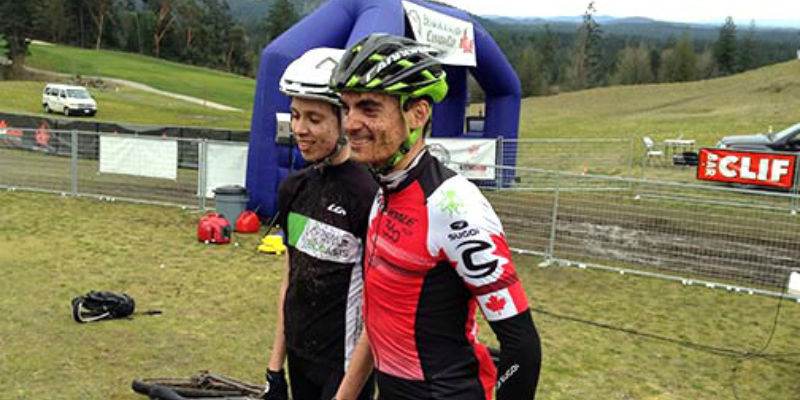 March 08, 2016 (Victoria, BC) – The Canadian mountain bike racing calendar was kicked off today in Victoria with the Bear Mountain Canada Cup event. Over 300 participants took to the freshly groomed and slick trails at the Westin Bear Mountain Resort located 10k west of Victoria on Vancouver Island. Serving as an early testing ground for Canada’s top racers, the mountain bike event was a resounding success and complimented by mild temperatures in the mid-teens.

For the Elite Women’s Race, 2 time World Champion Catherine Pendrel from Team Luna charged ahead on the first lap and immediately took the lead over Trek Factory Racing’s Emily Batty. Over the course of the race’s 5 laps, Pendrel built up a lead of over 1 minute and kept Batty at bay through to the very end. Batty fought hard on the last lap to try to close the gap, but was no match for Pendrel on today’s fast and winding course and settled for 2nd at 1:19. Rounding out the top 3 was BC’s Erin Huck from Scott Factory Racing at 2:15 who rallied from a mid-race rear flat tire to preserve her podium spot.

“It’s a course where its easy to make mistakes,” explains Catherine Pendrel on her rational to take the early lead. “Once I saw I had the lead then I had a go of it.” With her first win of the 2016 season, Pendrel is setting her sites firmly on being her absolute best for the Rio Olympics later this summer.

Elite / Junior Men
The Junior Men’s race featured a talented group of young up-and-comers. Quinton Disera from Team Ontario showed the BC crowd why he was one of Canada’s top off road racers. With a National Junior Cyclocross title under his belt, Disera did not make it easy for the other racers. It was a very fast contest as Disera fought off Sean Fincham from team Cycling BC for the win by 2:01. Émile Farrell-Dessureault from l’Équipe Du Québec took 3rd. Local cycling prodigy, 17 year old Max McCulloch from Team Rumble / Nextgen gave it his all to take 4th place and collapsed afterwards with exhaustion. “I was really happy with my result; my previous best Canada Cup result was 19th and 15th at Nationals,” said Max “So I was really happy with my improvement this year.”

The final event of the day featured a deep men’s field featuring reigning Canadian National Champion, Raphael Gagné from Cannondale 360Fly p/b Sugoi. Gagné did not disappoint when he burst out of the start with Derek Zanstra in tow. The two racers separated from the rest of the field and established a marginal lead. Hot on their heels was Léandre Bouchard from Team Cyclone d’Alma and Norco’s Evan McNeely. With 2 laps to go, Zanstra suffered a front wheel flat but was able to do a quick wheel change in the pit area and was back in the race to chase Bouchard and McNeely who had taken 2nd / 3rd places respectively. In a show of skill and speed, Zanstra was able to catch the two racers and reposition himself behind the leader, Gagné. In the closing meters of the last lap, it looked like the top 3 racers would be duking it out in a sprint. However, Gagné was able to surge ahead through the final hairpin turns and take his first win of the season as National Champion. Zanstra was able to sprint for 2nd place while Bouchard had to settle for 3rd. Evan McNeely rolled into the finish in 4th place at 1min 40sec off the pace of the leaders. Rounding out the top five was Andrew L’Esperance from the Norco Factory Team.