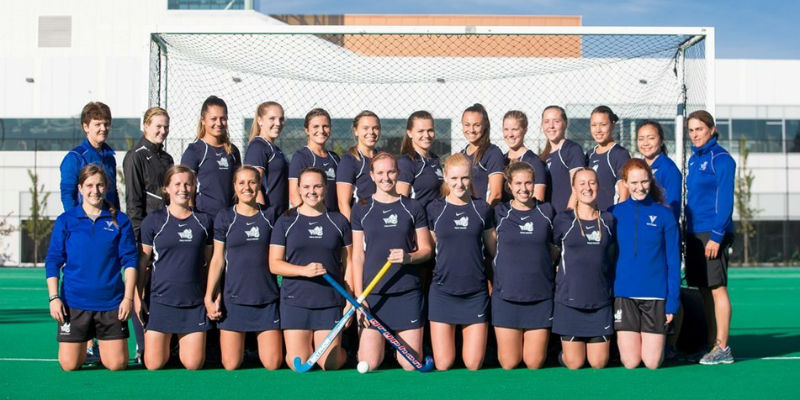 VICTORIA – The University of Victoria Vikes women’s field hockey team are pleased to announce the commitment of Victoria native and Mount Douglas Secondary graduate Alexis De Armond for the 2015-16 season. The 41st CIS/FHC national championship, set for Nov. 5-8, 2015, will return to Victoria as the Vikes will host for the seventh time since 1975.

De Armond is a graduate of the Rams field hockey program, coached by former Vike Andrea Rushton, as well as the recently formed Canadian Sport School at the Pacific Institute for Sport Excellence. Recently De Armond was named the Vancouver Island Ladies Field Hockey Association’s top Under 18 player and has locally been a committed member to the Lynx Field Hockey Club and the Kirby’s Island Wildcats premier team.

“I am extremely pleased that Lexi has chosen to attend UVic, and join the Vikes women’s field hockey team,” said Lynne Beecroft, who will enter her 32nd season as head coach this coming fall. “Lexi is a very skilled player who will have an opportunity to make a positive contribution to the 2015-16 Vikes team.  I look forward to watching her grow as a student, player, and person over the next five years!”

A multi-sport athlete, De Armond has excelled for years in soccer, basketball and track and field, while choosing to pursue field hockey primarily since 2012. With multiple accolades across a variety of disciplines, De Armond will build on her already successful hockey career by suiting up for the blue and gold next fall.

“It will be a privilege to be coached by Buzz and Krista and to follow in the footsteps of many outstanding Vikes,” added De Armond, who has previously been coached by UVic coaches Lynne Beecroft and Krista Thompson either through the Vikes Rising Stars program or the local high performance programs.

De Armond has no set commitment to a particular position, as the hopeful Social Sciences major as shown strength in the backfield, midfield and up front. De Armond and the Vikes will look to break UBC’s four-straight national title streak and go for their 12th McCrae Cup, last won at home in 2008, on Nov. 5-8 at UVic’s water-based artificial field. As hosts, the Vikes will automatically earn a berth into the Championship, while the tournament will also feature one other berth from the Canada West and two from the eastern conferences.