You are here:
CSS Northern BC 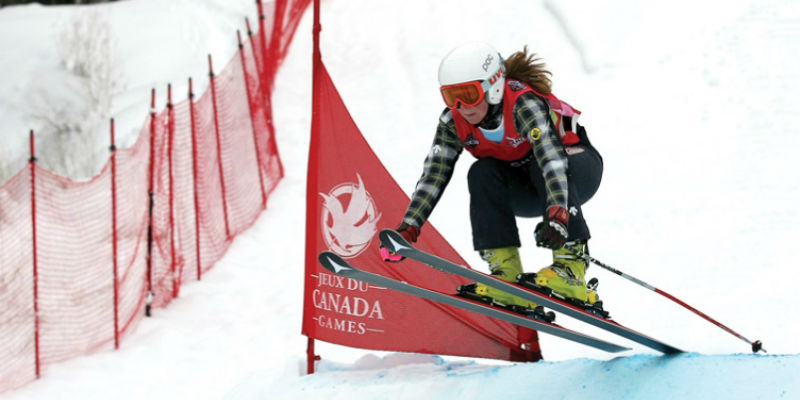 It helps to know the course, but there far are too many variables in ski cross, a sport that sometimes turns into a roller derby on skis, to predict whether a day at the races will end in triumph or tragedy.

Gairns, a 17-year-old member of the Prince George Alpine Ski Club, had no trouble holding her nerves in check as the hometown favourite and captured both NorAm Cup events Saturday and Sunday.

Gairns, who started skiing at local resorts when she was two years old, was the fastest qualifier in an 11-skier women’s field Saturday. She reeled off wins in her two heat races and was untouchable in the final, grabbing top spot on the podium over second-place Mara White of Squaw Valley, Calif., and third-place Courtney Hoffos of Invermere.

“It’s quite an advantage to know the course. I’ve had three or four different races here and I know where all the berms are and where the good passing spots are and where I have to defend my line, which all the other girls had to learn just for this race,” said Gairns. “I had lots of time to figure it out. Tabor has an amazing hill.”

The course hardened overnight Saturday when the temperature dipped to -7 C and that made for faster conditions than Friday’s training session. While that created problems for a few racers in the rollers section, Gairns took advantage of the speed boost.

“(Friday) it actually was harder to go over some of the jumps, you had to pop more, and I’m better at absorbing (the bumps) and just going for it,” said Gairns.

In the men’s race Saturday, top qualifier Mathieu Leduc of Comox stayed ahead of tight pack in the medal final to take gold ahead of two-time national champion Tristan Tafel of Canmore and third-place Zach Belczyk of Banff.

“I just tried to race my race, tried to shut the door and make them go around me and it worked out,” said Leduc, who had lane choice throughout the day as the top qualifier but said that wasn’t much of an advantage. “It’s such an even start, such a long straight coming into the first turn, it’s a good start and we had some tight races.”

Gairns is on the verge of gaining a spot on the NextGen national development team, one step down from the senior World Cup team which includes 2014 Olympic gold and silver medalists Marielle Thompson and Kelsey Serwa, and seven-time World Cup podium finisher Dave Duncan.

Gairns took part in a national team training camp in Switzerland in November and has been attending provincial camps and is racing alpine events in B.C. and Alberta. She plans to race next weekend when the NorAm ski cross tour comes to Nakiska and hopes to compete in the NorAm/Canadian championships in Smithers in late March. This is only her second season racing ski cross.

“I really like the aspect of having other people around you, they just make you ski so much faster and so much more intense, so it pushes you that much more,” said Gairns.

The youngest daughter of Sandra and Stuart Gairns is a carded athlete who attends PacificSport Northern B.C. sport school while enrolled at Kelly Road secondary school. She hopes by next season to move up to the NextGen national team and head coach Sead Causevic says that is a real possibility.

“Technically she’s very strong, she’s done a lot of really good alpine training and recently she started picking up on ski cross skills — everything’s been on track,” said Causevic. “She’s quite focused, she’s as serious as you’d want someone that young to be. She’s ticking off all the check boxes and making it happen.

“She just has very good biomechanics, she stands on her skis well. That might sound simple but it’s quite a hard thing to do, to have good positioning on your skis so you’re able to absorb anything. You want to carry your centre mass down the hill with as little airtime as possible.”

Leduc, 25, a three-year Word Cup veteran, posted a seventh-place finish in Val Thorens, France in mid-December in his first race back after being sidelined 20 months after he tore four knee ligaments in a crash at another World Cup race in France.

“I blew my knee two years ago so I’m taking it easy rehabbing trying not to beat it up too much this year and hopefully be able to push it for (the Olympics) in Korea in two years,” Leduc said.

Leduc, who started skiing at age 4 at Mount Washington, is looking forward to competing next month at the Winter X Games in Aspen, Colo. Ski cross is an X Games event for the first time since 2012.

White, 16, was among a group of six Californians who made the trek to Prince George for the first Canadian NorAm event of the season.

“I love Canada and the course is great, it’s pretty wide-open and they did a good job building it all, lots of good jumps and rollers — it’s pretty fast compared to (Friday),” said White, who was fourth on Sunday. “On the last jump (in the final) I suddenly got thrown sideways but I saved it, luckily.”

In other local results, Gavin Rowell of Prince George, 16, advanced to the second round of hearts Sunday, after he was eliminated in the opening round on Saturday. Jason Oliemans of Smithers lost out in the quarterfinal round both days. Twenty-seven males entered the weekend races.