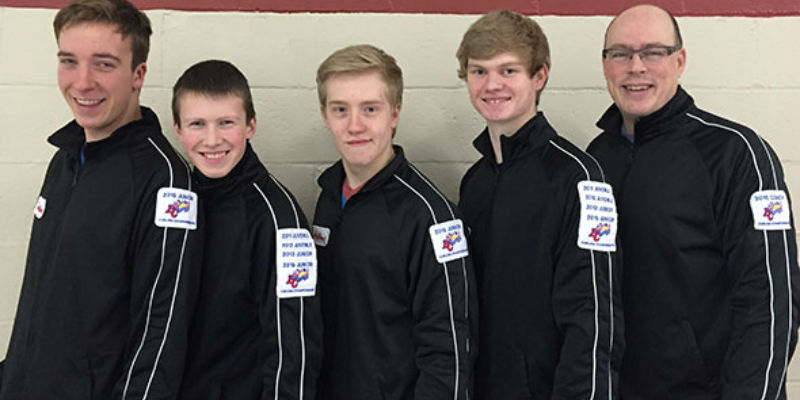 Teams from Kamloops and Victoria will represent the province at the national championships after winning the 2015 Tim Hortons BC Junior Curling Championships.

The finals, held at Parksville Curling Club on Saturday January 3, saw the 2013 M&M Meat Shops Canadian Junior Curling Champions Team Brown regain the Junior Women’s title and Team Henderson be crowned the Junior Men’s champions – the fourth rink from Victoria Curling Club to take the title in as many years.

The Island rink had previously lost to Team Tanaka in the round-robin stage but Paul felt this worked in their favour. He said: “Coming up against Tanaka, I felt like if anything there was more pressure on them since they had beaten us before; we were the underdogs with nothing to lose!”

That approach seemed to work as the rink gained an early lead, stealing three in the first end. Tanaka quickly bounced back with superb draw for one against four and the teams were tied on 5-5 at the half-way point. Team Henderson then took three straight ends to lead 9-5 before Tanaka pulled two back. In the tenth end the Islanders had to clear one of Tanaka’s two stones for the win, something which skip Paul relished, saying: “The guys left me an open hit for the win, I couldn’t ask anything more of them!

“It’s been my dream to win a BC title for longer than I can remember and it means the world to be able to represent British Columbia at nationals and test our mettle against some of the best young teams in Canada”, he added.

Team Henderson’s victory also means that their coach Todd Troyer has now guided three different teams to the BC Junior Men’s title, as well as winning the 1988 Canadian Junior Men’s Championships as a curler. The rink will be hoping to emulate his success when they travel to Corner Brook, Newfoundland to compete in the 2015 M&M Meat Shops Canadian Junior Curling Championships from January 24 – February 1.

Team Henderson will be joined in Newfoundland by Team Brown who beat Delta Thistle’s Team Daniels 8-2 to be named BC Junior Women’s champions once again.

Whilst the line-up of the Women’s final featured seven of the eight curlers who contested the 2014 title, the result was quite different this year as the Kamloops Curling Club team that had to settle for silver last time coming out on top.

The rink of skip Corryn Brown, third Erin Pincott, second Samantha Fisher and lead Sydney Fraser, who are coached by two-time BC Scotties and BC Junior Women’s champion Allison MacInnes, have been playing together for nine years. Their experience showed in the final as they steadily stole singles in the second, third, fourth and fifth end before securing three points in the seventh end to build an unassailable lead.

Despite getting a single in the eighth, Team Daniels, which included three of the 2014 Canadian Junior Women’s silver medallists, could not bounce back and conceded after the ninth end.

Speaking about the final, skip Corryn said: “After losing to Team Daniels in round robin play, we knew it would take our A-game to have a chance at the title. Our goal going in was to have a good team game as a whole and get off to a good start. We were fortunate to get a few steals early on and it was a well-played game by both teams, we just happened to come out on right side of things. I am so proud of how we played as a team and we have the utmost respect for Team Daniels and their playing abilities.”

When Team Brown won the 2013 BC Junior Women’s title they went on to win the Canadian Championships as well, an achievement that Corryn says they are keen to repeat: “Going to the Canadians this time around will be a different experience than in 2013. We are two years older as well as stronger physically and more consistent all-around players. I believe that we can have the same success that we did in 2013 but we will just have to see how the competition plays out because, as we all know, anything can happen!”

Three of the medal winners in Parksville will get another shot at gold when they represent BC at the 2015 Canada Winter Games in Prince George later this year. Timothy Henderson, the lead on Team Henderson, will be playing in the Men’s event as part of Team Tardi, whilst Sarah Daniels will skip a team that includes fellow BC Junior Women’s silver medallist Dezaray Hawes.

To see photos of the 2015 Tim Hortons BC Junior Championships, log on to the Curl BC Facebook page.