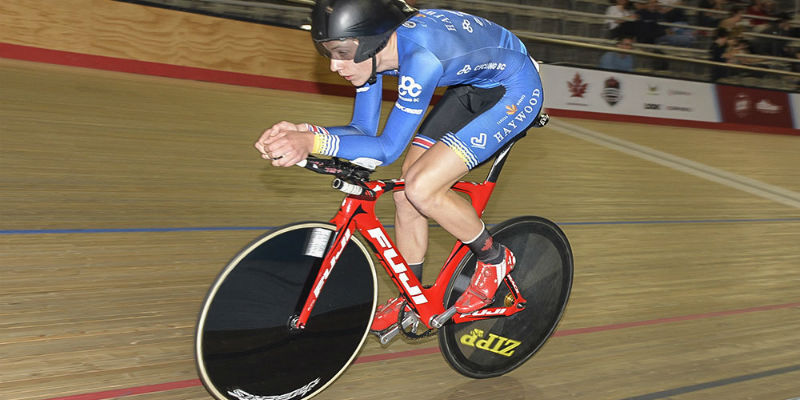 (Ottawa, ON – April 28, 2016) Cycling Canada has announced the team of athletes that will represent Canada at the 2016 UCI Junior Track World Championships, to take place in Aigle, Switzerland, on July 20-24.

Following the well-attended and successful Canadian Junior Track Championships at the Mattamy National Cycling Centre in Milton, Ontario, 13 athletes were chosen for the World Championships project. Specific event participation will be determined closer to the event.

Five women and eight men from four provinces will compete in endurance and sprint events, including the Women’s Madison, a new event for the World Championships. The team will be led by Ian Melvin, Cycling Canada’s Men’s NextGen Track Endurance Coach. The team will undertake a preparation camp in Milton on July 2-14, before travelling to Aigle.

“It’s the biggest group of athletes we have taken to Junior Worlds for some years,” says Melvin, “and that is a reflection of the hard work that has been taking place in the provinces. There’s some really exciting young talent starting to emerge.”

“We have a complement of five men and women each for endurance and three male sprinters. The primary focus is very much in line with the elite national team and is focussed on Olympic events first and foremost. This means the Team Sprint and Team Pursuit will be the basis of our focus.”

“However, we are also excited about the potential of some of our athletes to ride very strongly in some of the individual events. In both the Omnium and Individual Pursuit we have strong contenders. Both Erin Attwell and Maggie Coles-Lyster on the women’s side, and John Willcox and Cameron Fitzmaurice for the men, will be riders to look out. As well, Stefan Ritter for the men’s Sprint will be one to watch.”