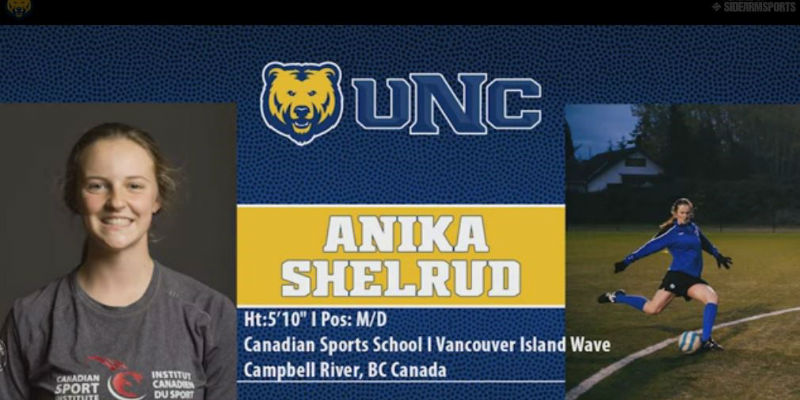 GREELEY, Colo. – Head coach Tim Barrera finalizes his 2016 recruiting class on Tuesday, welcoming seven new players to the program in the most geographically diverse recruiting class in his time as head coach at UNC.

Olivia Seddon – Midfielder – Chino Hills, California:
Seddon currently attends Chino Hills High School, where she has been a four-year varsity player including being a captain for the last two. Her high school team were CIF Champions in 2013 and CIF State finalists in 2014. Seddon was named a top-10 goal scorer in the 2016 Baseline League, and was the leading/tied top-scorer for her club team, Legends FC. Her club team participated in the Surf Cup in November 2015 and the National League in December 2015. They were Surf Cup finalists (November) 2014, and were named Surf Cup Champions (July) and California National Cup finalists the same year.

Taylor Lile – Defender – Overland Park, Kansas:
As the first Bear from Kansas since Barrera has been at the helm, Taylor Lile comes from Blue Valley West High School, where she is a four-year varsity letterman and her team’s captain. Lile is currently the record holder for most header goals for Blue Valley West, and was named to the second team All-Eastern Kansas League in 2015, and made honorable mention in 2014. Playing club soccer for the Sporting Blue Valley Aztecs, she holds a captain position for the squad, who were named 2012 Futsal National Champions.

Kenzie Engelkins – Midfielder – Colorado Springs, Colorado:
Engelkins comes to the Bears from Liberty High School where her team was named the State Cup Champions twice, as well as taking second at State her senior season. She was also named first team All-Conference twice. Kenzie’s club team, the Colorado Pride Predators, is the same club team that current Bears Brooke Braden, Kaitlyn Ruff, and Adrienne Jordan played on, and Engelkins held the captain position on the team her senior
season.

Anika Shelrud – Midfielder/Defender – Campbell River, BC Canada:
Anika is the first true Canadian to join the Bears’ program, attending the Canadian Sports School and playing club soccer for the Vancouver Island Wave. Shelrud has played on Team BC in the High Performance League from 2012-2016, and the 2015 LISA All-Star Team. Anika also does extremely well in school, notching English honors and making the A Honor Roll.

Kylee Duren – Midfielder/Forward – Highlands Ranch, Colorado:
Another in-state recruit, Kylee Duran comes from ThunderRidge High School, where she was the leading scorer her freshman season. To close out her junior season, the team made it all the way to the state semi-finals. Duren was named third team All-League her freshman and junior seasons. Kylee has played club soccer for Real National ECNL for the last seven years. Her U12/U13 team was back-back State Cup Champions, and has made it to the ECNL National Championships every year since U14, placing second for U15 and third for U17. Her U18 has already qualified for the National Championships this year, taking place this upcoming June.

Lindsay Lyons – Defender – Albuquerque, New Mexico:
Lindsay Lyons will join the Bears from La Cueva High School, the most decorated high school team in New Mexico. Her team won state in 2014, and won their district in 2015. Lyons made second team All-District in 2013, and made honorable mention in 2015. She plays club soccer for the New Mexico Rush, a team that won their state title in 2015.

Athena Pilato – Forward/Midfielder – Havertown, Pennsylvania:
Pilato hails all the way from the East Coast, an area virtually untouched previously by the Bear team. Playing high school soccer for Haverford High School, Pilato was a four-year varsity starter and was named All-Delaware county honorable mention for both soccer and track. She was a member of the 2015 Central League All-Star Team as well. Her club team, FC Europa, was named WAGS and CASL Champions, EDP Cup Finalists, and 2015 Pennsylvania State Cup semi-finalists.