The Province’s Head of the Class 2017: Sophie de Goede 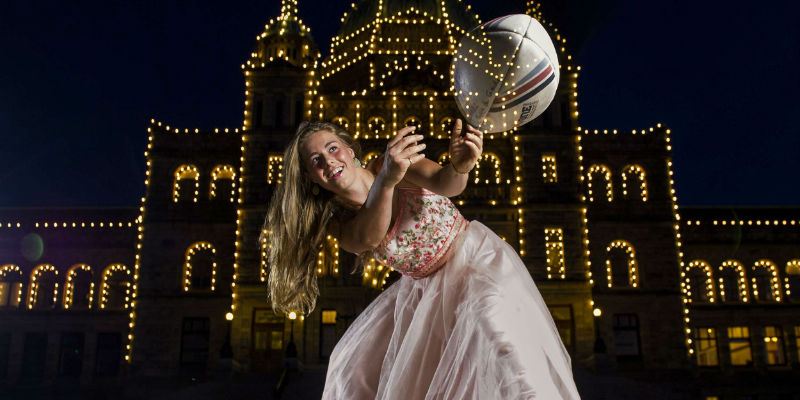 Her dad captained Canada at the first Rugby World Cup. Her mom was the first captain of the Canadian women’s rugby team.

With that kind of lineage, it’s no cliche to say that Sophie de Goede was born to play rugby.

What’s fact is that the 6-foot-1 de Goede is easily one of the most pure athletes to come through the B.C. high school sporting ranks in the last quarter-century.

Blessed with a blend of power, balance, instinct and non-stop competitiveness, de Goede’s rugby pedigree is already such that she seems to be standing on the precipice of a long career with the senior national team in both sevens and XVs and at both Olympics and world championships.

Yet by happenstance, she went out for the basketball team at her school, not only making the roster of the perennial B.C. Triple A title-contending Breakers, but emerging from her early role as a hustle player to that of a dynamic force whose will to win outstripped virtually everyone she faced.

“I didn’t expect to find that level of success and that it would work out the way it did,” said de Goede. “I thought I would just be a workhorse, but I had a knack for it, I got some recognition and things just took over.”

And when she let it be known that her choice of university would include a place where she could play both sports, athletic directors across Canada weren’t only undaunted, they actually scrummed with the coaches of de Goede’s two sports and found ways to make their best pitch for her services.

In the end, Queen’s University won her heart, and so it will be in Kingston, Ont., where de Goede will begin a most-unique, two-sport life this September.

The Canadian senior national sevens program she would love to make a part of her long-term future trains right in her hometown of Victoria.

“I have enough self-belief that I can go away to university and still be able to make national teams,” she says. “I just didn’t want to give up basketball and my whole university experience.

“I also think moving away from home and having some independence will help me grow. Going to school full-time (with rugby and basketball), you have to juggle. It’s a challenge and that is how you grow.”

Over the course of her high school life, she also rowed, played soccer and ran cross-country and track, all while keeping herself in the high-90-per-cent region in the classroom within a math- and sciences-based curriculum.

Rugby may well end up bringing Sophie de Goede a lot of recognition, but already, at age 17, you can see that her greatest accomplishment is going to be the purpose she brought and the pride she took in everything she did.