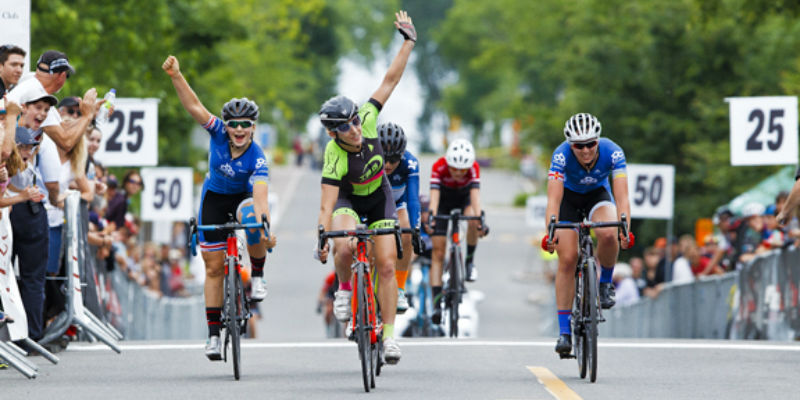 OTTAWA, June 25, 2017 – The first day of competition at the Global Relay Canadian Road Championships p/b Lexus in Ottawa on Saturday saw closely fought sprint finishes for road race titles awarded for Junior Men and Women, and Elite and Under-23 Women.

In the marque Elite Women’s 120 kilometre road race, Olympic track bronze medalist Allison Beveridge (Rally Cycling) of Calgary, Alberta, won the sprint from the final breakaway to take the title, followed by team mate Kirsti Lay of Montreal and Alison Jackson (Be Pink) of Vermilion, Alberta.  Finishing in the same breakaway was Under-23 champion Catherine Ouellette (The Cyclery 4iiii) of St-Lambert, Quebec.

An initial break of four riders was joined in the final 40 kilometres by six more riders, with four of them riding for the U.S. pro team Rally Cycling.  Rally went through the final corner with 200 metres to go with Beveridge on third wheel behind team mates Sarah Poidevin and Lay, and the winner came off Lay’s wheel with 100 metres to go to take the title, followed by Lay and Jackson in third.

“It’s a bit weird to be honest,” admitted Beveridge, “I didn’t think going in that I could do it.  But we had the strongest team here and when we stacked the break with four Rally riders in ten total, we knew we had to do it.  It was hard, we had a couple of girls really commit to pushing the break, but it was a bit of a balancing game, trying not to use all our energy.  It’s not something I ever thought I could do, but this course suits a track rider.  With the team we had, all I had to do was go out there and finish it off.”

Racing continues on Sunday with the Elite and Under-23 Men’s road race.