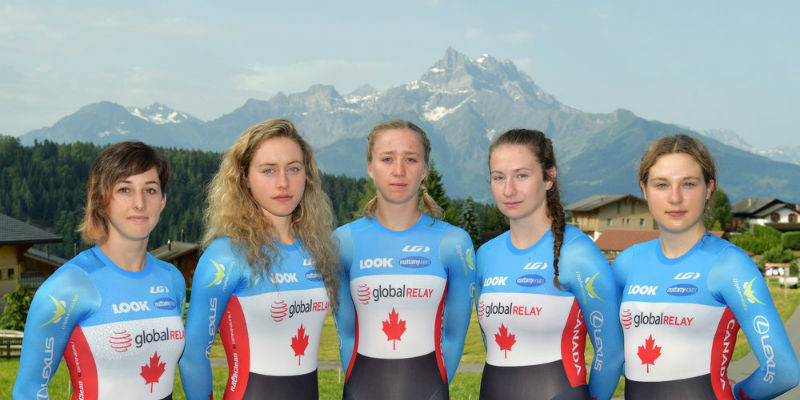 “The track is warm, it’s a fun environment and I get to see my friends,” Erin Attwell said about flying across the country from her home in Victoria to take part in the national championships. “I don’t stress about the podiums, getting that is just icing on the cake. I come to race hard, I want to do well so I can go to worlds.”

During spring break, instead of heading down south like many of her friends, Canadian women’s junior road champion Atwell is in Milton, Ontario where she is contesting the 2017 Canadian junior track national championships. With one title under her belt on the event’s first day, Atwell is here to secure her place at the 2017 junior track world championships in Shenyang, China.

“It’s a chance to build relationships with coaches and teammates,” Atwell explains about the annual rendezvous between Canada’s most promising young track cyclists. “As a junior, you just have to have fun and like what you do.”

The competition is also the time that Attwell goes head-to-head with other riders vying for spots on the national team. “There are some rivalries but we are all friends,” Attwell said. “My biggest competition is Maggie Coles-Lyster from Maple Ridge, but we are friends. After the race, we give each other a hug.”

Nationals is one of the two most important events on a young Canadian cyclists calendar because it is where Cycling Canada make their selections for the world championships. Later in the season, Attwell will be in Ottawa to defend her road title which is the second big target on her 2017 calendar in order to make the Canadian selection for worlds in Bergen, Norway. She hopes to podium in both the road race and time trial. On the road, Attwell will wear the jersey of Trek Red Truck Racing in 2017 but as a junior will be ineligible for the UCI races on the team’s calendar.

Balancing the two disciplines is a strategy that has worked with great success for other national federations such as British and Australia which have seen many top track athletes move on to successful careers in the top echelons of the road peloton.

“I think they compliment each other really well,” Attwell explained about balancing the two disciplines. “I have done about an equal amount of both and I really enjoy them both. It’s the same group of athletes and it’s a great atmosphere to be in.”

Attwell is a student at the Canadian Sports School in Victoria and the academic program she follows allows her to balance her ambitions in cycling with her studies. “It’s easy to catch up on homework I have missed. They have strength and conditioning coaches,” Attwell explained. “They have been an incredible help and it’s been amazing. It’s really helped balance my school and athletic endeavors.”