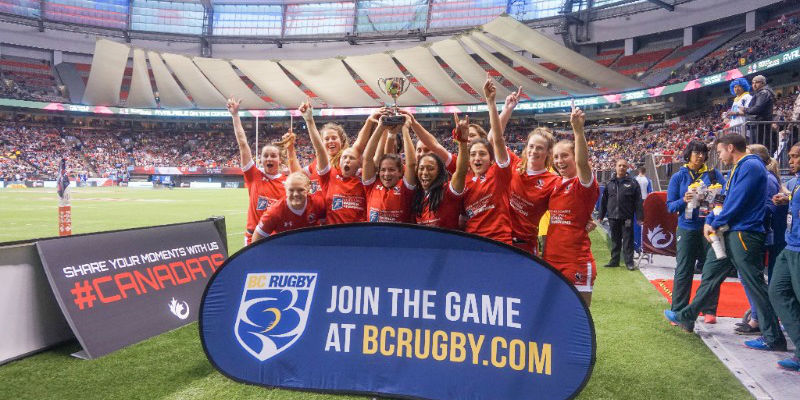 Vancouver, BC – March 15, 2017: With 50 teams across 9 different divisions, the Vancouver Rugby Festival drew in large crowds of spectators and fans at both UBC and Connaught Park.

The 2-day tournament brought high energy and fierce competition with Day 2 ending in a rematch between Maple Leafs and Wolfpack (the top 2 teams in the Elite Men’s Division in last year’s Festival). With strong back and forths from both teams, in the end the Maple Leafs walked away with the win and $5000 prize money.

The Festival continued in BC Place during Day 1 of the HSBC Canada Sevens tournament as the 4 teams from the Elite Women’s Division competed in front of 30,000 spectators during the Bronze and Gold Medal matches. With strong efforts made by all teams, the Maple Leafs took Gold while the South Africa Select took Silver and the USA Falcons Bronze.

Overall the tournament was a huge success, providing an opportunity for teams to receive high-quality competition from local and international teams. Sean Liebich, Manager of the Maple Leafs Men’s team shares, “It was great to come away with a win, but it was even better to see the growth of the tournament. It is clear that the VRF is well on its way to becoming a world class invitational tournament. We would like to thank UBC, BC Rugby, the Host Organizing Committee and all of the volunteers that were involved. This tournament will remain a fixture in our calendar and we are all looking forward to next year.”

Meaghan Howat, on behalf of the Maple Leafs Women’s team, expresses similar enthusiasm, “It is great to be able to play a tournament so close to home, we need these competitions in order to get better. Playing in the stadium is a tremendous experience for the athletes and to come away with the win was perfect while showcasing the women’s program. We hope in future years the tournament can grow in number of teams and overall level of competition to become a key invitational stop.”

BC Rugby would like to thank all the teams that participated in the Festival as well as all the spectators who attended throughout the 2 days. BC Rugby would also like to thank all the staff, Board of Directors, volunteers, medical staff, referees and partners for bringing this event to life. Lastly, thank you to Grosvenor and Donnelly Group for sponsoring the prize money for the Elite and Open Divisions.