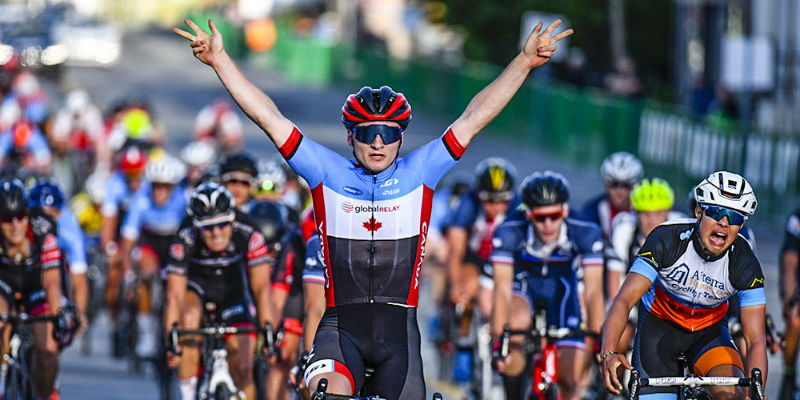 Riley Pickrell of Victoria stamped his name as a rising national cyclist by winning three of the seven stages to take the Points Jersey in the 2018 Tour de l’Abitibi in Quebec. The event celebrated its 50th anniversary as Canada’s leading junior men’s stage race, out of which several later-notable Canadian pro and Olympic riders such as Steve Bauer, Alex Stieda and Victoria’s Roland Green have emerged.

The event was a big step and an eye-opener, Pickrell admitted.

“The race was far more than I expected,” said the Islander, in a statement.

“The strength of the international field is shocking. To come away with three stage wins is surreal. Abitibi was amazing. It is by far the favourite stage race I’ve competed in, due to the sportsmanship and fellowship created by hard international racing. I would often be amazed by the speed of the peloton.”

Pickrell is going into Grade 12 at Claremont Secondary and the Canadian Sports School-Victoria. He has Canadian coaches predicting big things for him.

“Riley really proved he has the class to win at the international level on the road, after dominating the sprints throughout the race,” said Scott McFarlane, of the Canadian pro development team Silber Pro Cycling, who directed the Canadian riders for the first five stages of l’Abitibi.

But the versatile Victoria Tripleshot Club product has choices within the sport. Having also come up in the Juan de Fuca 1994 Commonwealth Games Velodrome, Pickrell is as comfortable riding in a velodrome as on the road, and has qualified to represent Canada at the UCI Junior Track Cycling World Championships from Aug. 15-19 in Aigle, Switzerland.