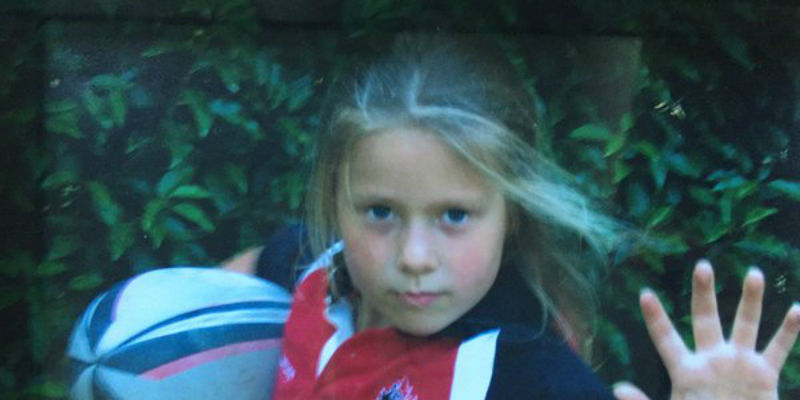 “We just played the U.S. every year from ’87 to ’91 then went to the world cup,” says White. Canada finished fifth in that inaugural women’s world cup; the U.S. team finished first.

White played a full decade through to 1997, laying down roots for the next generation of female players. White has full confidence in Canada’s athletes, both those who recently medalled at the Rio Olympics and those coming up, including daughter Sophie de Goede.

“It was pretty exciting when Sophie went to London with U18. I got to present Sophie with her No. 8 jersey,” White said.

In rugby 15s the No. 8 jersey represents the position she played, a jersey White too wore.

Twice she’s represented Canada on the U18 15s team.

The acclaimed Oak Bay High athlete and rugby talent scored her third Canadian jersey – and a spot on the U18 national sevens team headed for the European Championships in Vichy, France Sept. 10 and 11.

DeGoede, who played with U18 elite team BC, winning the division, is also an elite basketball player and a high academic achiever who attends Canadian Sport School Victoria and Oak Bay High.

“It’s always exciting when you get to represent your country,” Sophie said.

It’s her first Canadian sevens squad and she enjoys the faster-paced form of the game. “There’s a lot more space to  manage and room to experiment and make plays,” Sophie said. “I like having to make decisions under pressure in a game situation.”

White enjoys watching her daughter perform in those same situations.

“I know my mom never liked watching me,” White said. “Sophie’s big and strong and makes a difference out there so it makes me proud.”

One of her earliest rugby-playing memories is Sophie at age four running down the field with a ball tucked under her arm and a doll stuffed in a backpack on her back.

She was simply too young to leave at home alone as mom and dad, Hans de Goede both coached rugby practices that overlapped.

By the time Sophie was around Grade 3, Willows elementary started a girls rugby program, and they turned to the expertise available in the community, including White.

“Sophie got to start a year early because again, we couldn’t leave her home alone, so she came along,” mom recalls.

Despite the longevity and intensity of her immersion in the sport, Sophie still feels the passion for rugby.

“I think it’s because I’ve played so many other sports,” she says. “My parents have always been very supportive of me. They wanted me to play other sports to be a well-rounded athlete. They’d be happy with whatever level I got to in whatever sport as long as I was enjoying it.”

As well as many other high school sports, she’s a high-calibre basketball player – one of 42 athletes (25 Cadette and 17 Junior) invited to participate in the women’s national age-group assessment camp at Humber College last March. While she didn’t make the top 24 this year, “there’s always next year,” Sophie says.

Being in Grade 12 at Oak Bay High this year, her prowess in two sports offers opportunities, and challenges.

“I’ve got to make some decisions on what I want to do,” Sophie said. She must choose between remaining in the quality carded system in Victoria or playing university basketball or rugby – both options for her. She also holds out potential for rugby and basketball in post-secondary play.

In the meantime, focus is on a strict training program for speed, strength, conditioning with at least six sessions a week, at times training with Jen Joyce at the Pacific Institute for Sport Excellence.

“I love her, we work with her for the Canada Sport School stuff too,” Sophie said. They work on a skills menu to complete every week, and occasionally she meets up with teammate and recent Oak Bay High grad Crossley. The rest of the team comes together for the first time as they head for Europe Sept. 4.

Both young athletes also train at Rugby Canada in Langford, alongside the sevens team that notched the nation high exposure for the women’s side.

After a 33-10 win over Great Britain, Canada claimed the inaugural bronze medal in rugby sevens at the Olympic Games.

After going 2-1 in pool play, Canada beat France to advance to the semi-finals where they would lose 17-5 to Australia, who would go on to win gold after beating New Zealand.

“It’s inspiring to see the effort they put in every day,” Sophie said. “It lets you know how committed you have to be to get to that level.”

The Castaway season starts this month and they are always looking for more players. Castaway Wanderers Rugby Football Club, is a member of the Discovery Street Sports Club in Victoria and teams play out of Henderson and Carnarvon parks in Oak Bay.