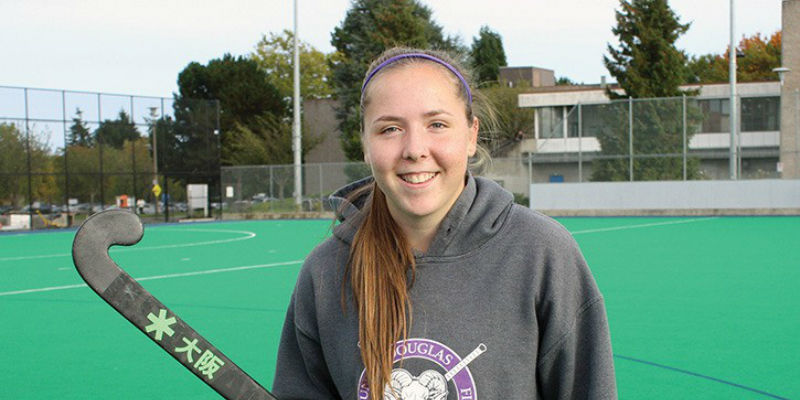 Lexi De Armond isn’t waiting around for things to happen.

on Tuesday, despite suffering from an injury. As soon as she’s cleared to play, she will.

De Armond never waited to join the Rams in the first place, having played with the high school senior girls team since she was in Grade 7 at Arbutus middle school. She’s also on Victoria’s premier women’s Wildcats, and is hoping to catch on with the national junior team after winning the U18 nationals with Team B.C. this summer.

“There’s word of a fall tour for the junior team so maybe I can get into that, I hope,” she said.

The jump between  playing with the Rams in the Lower Island school field hockey league to the Wildcats in the premier division of the Vancouver Women’s Field Hockey Association is a jump that’s sometimes frustrating, she said.

“It’s a lot of fun playing high school hockey but it’s quite different, I do score more goals off set plays.”

There are other Team B.C. members on the Rams, including a trio of Grade 9 players who were on Team B.C., Claire Church, Natalie Boraston, and Stefanie Sajko.

“It’s funny, I used to be the young one, and now even on the Wildcats I’m not the youngest anymore,” De Armond said.

So the Rams’ future is good, but the time is now for De Armond and crew to challenge for the league title. They were knocked out of the historic Bridgman Cup over the weekend by Handsworth from North Vancouver. But in four league games the Rams remain undefeated.

Mount Doug plays its next two games of the season, Oak Bay on Monday and St. Michaels University School on Wednesday, at UVic’s water-based turf.

Following that is the Rams’ final regular season match, Oct. 27 versus SMUS II, before the AAA Island playoffs, Oct. 31 to Nov. 1 at UVic. The AA playoffs are coming up, Oct. 24 and 25 at a to-be-determined location up Island.

De Armond will likely suit up for the UVic Vikes or UBC Thunderbirds next year, and hopes to play for the senior national team one day.