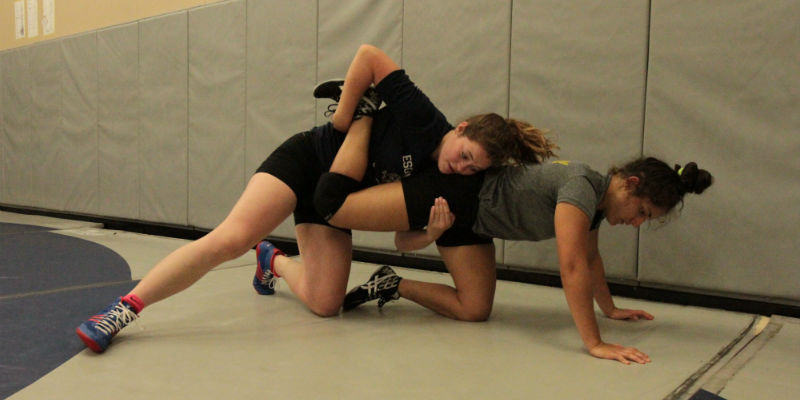 COQUITLAM (NEWS 1130) – In the lobby of the Pinetree Community Centre in Coquitlam, dozens of kids attending a wrestling camp momentarily abandoned the mat and crowded around a laptop.

Leaning over staircase railings, and even on top of each other, the eager kids watched with baited breath as Canadian female wrestler Erica Wiebe grappled her way into Canadian Olympic history.

Erin Geddie was among the crowd, leaning over against the table among her friends.

“As soon as she got those last two points, we knew in the last 30 seconds she had cleared her out and she had won. It was just so awesome to watch,” she says.

Geddie is one of several girls attending the Coast Wrestling camp who drew inspiration from Wiebe’s gold medal win.

The 16-year-old Victoria native who competes in the 70kg weight class has wrestled for five years, competed in the cadet class of the Pan American Games, will take on the World Championships in Tbilisi, Georgia and one day hopes to make it all the way to the Olympic podium.

“For me, (Wiebe’s win) really gives me hope for the future because at some point I would like to be at that level,” she says.

She’ll be joined at the World Championships by fellow B.C. wrestler Alexia Seal who will compete in the 73 kg class.

The two future Olympian hopefuls say Wiebe and Carol Wynn have put a lot into women’s wrestling to show women can come out and compete at the same level as their male counterparts.

They also say the sport gave them confidence and a network of close-knit friends.

“Instantly I just connected with everyone because they all know what it means to work hard, to get your butt kicked and still come out and be ready for practice next week,” Geddie says.

Although she still gets strange looks when she tells people she wrestles, Geddie says it hasn’t stopped her yet, and she encourages other girls to try it out.

“Everyone has this idealist image of what athletes should and shouldn’t look like, and wrestling is definitely one of those sports where you can just show up as yourself.”