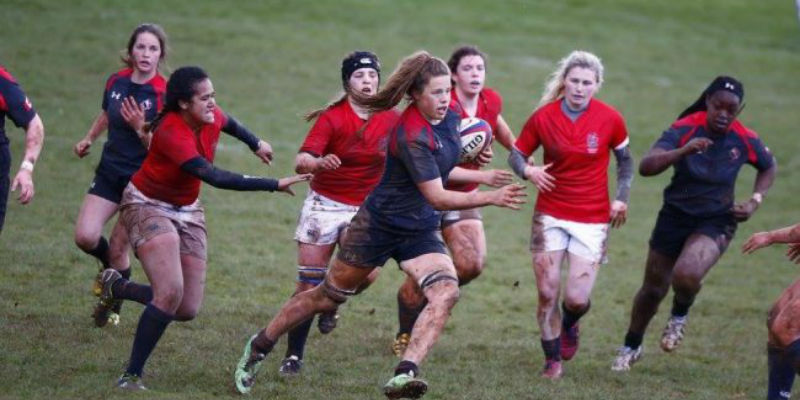 Victoria, BC – Seeing a student start the day in the Canadian Sport School classroom and end it in a Rugby Canada training session has become a regular occurrence in recent years at the Canadian Sport Institute Pacific’s Victoria campus.

Operating out of the same facility at Pacific Institute for Sport Excellence, the connection between CSI Pacific’s Canadian Sport School and Rugby Canada has helped young women’s rugby players hone their skills in the classroom and gym. The Canadian Sport School is designed to assist high school athletes manage their time, commitments and demands of being a teenager, along with the expectations of being a high performance athlete.

“Since 2013, we have built a unique and integrated partnership with Rugby Canada to support their national team athletes who are still completing their high school education. The strength of this relationship is exemplified in Charity Williams’ evolution from sport school student to bronze medallist at the Rio 2016 Olympics.” said Canadian Sport School Victoria Coach Jenn Joyce. “We look forward to continuing to provide Rugby Canada’s young athletes with valuable athletic and academic support in the years to come.”

The Canadian Sport School saw another one of their rising rugby stars achieve a major milestone in October when Grade 12 student Sophie de Goede received her Sport Canada carding to centralize with Canada’s Women’s Sevens team. A third-year student in the program, de Goede has made major strides since attending Canadian Sport School. She represented Rugby Canada in August at the U18 Women’s European Championships in Vichy, France and was also a member of Basketball BC`s U17 squad in 2016.

“The Canadian Sport School and its staff have made a tremendous impact on my development as an athlete and a person, and are a large driving factor behind my success to date,” shared de Goede. “Learning the ins and outs of the high performance system – the necessary training and lifestyle habits – from such an early age has made my transition into the national team system quite seamless.

“I am incredibly grateful to have had the opportunity to be exposed to and immersed in that type of elite environment though the Canadian Sport School.”

Members of Canada’s centralized team will travel this weekend to Trinidad and Tobago for the Rugby Americas North Sevens Championship. De Goede was named to the roster along with Canadian Sport School classmate Denise Roy and program graduate Caroline Crossley. The tournament is a great opportunity for all three to show coaches what they are capable of ahead of the 2016-17 HSBC Sevens Series and at the start of a new Olympic quadrennial.

“As a coach, it’s extremely rewarding to work with our student-athletes and play a role in their journey.  Our entire staff is inspired by the pursuit of excellence and professionalism that our athletes demonstrate on a daily basis,” expressed Joyce.

The Victoria-based Sport School program began its sixth school year in September, welcoming a class of 17 new students from 11 different sports. The growth of women’s sport in Canada has carried into the Canadian Sport School classroom, where 19 of this year’s students are girls.