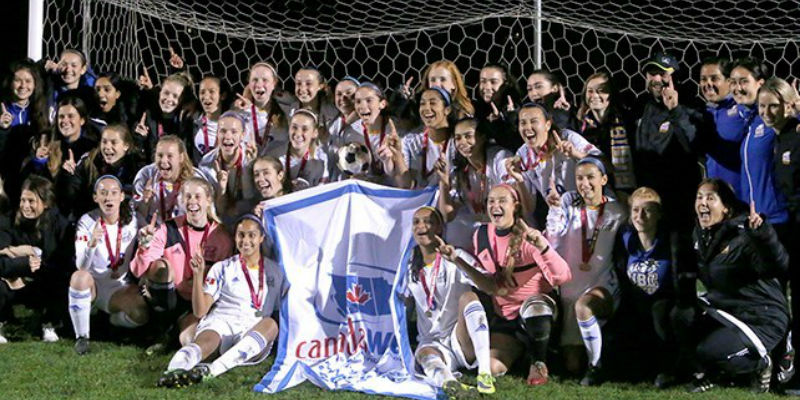 LANGLEY, British Columbia – The UBC Thunderbirds defeated the No. 2 ranked Trinity Western Spartans 3-0 in the Canada West gold medal match Sunday afternoon in the final of the Select Six tournament. The victory makes it two straight Canada West championships for the Thunderbirds.

“Our last two weeks have been phenomenal. Ever since the come from behind game against Alberta the team has had a little bit of jump to them. They have been preparing for November and we are excited to see what can transpire at Acadia this next week,” commented UBC head coach Jesse Symons.UBC will now head to the CIS women’s soccer championship as the No. 1 seed out of Canada West. TWU, who also lost last year’s CW title and CIS title to UBC, will go in as the No. 2 seed from Canada West.

“We spoke a lot about how we are a team that has a lot of weapons up front and how we can really come out strong early in games,” said Symons. “Throughout the season we were often playing from behind. This weekend we wanted to be on the front foot from the get go.”

UBC finished the evening outshooting the Spartans 19-6. TWU fifth year keeper Ally Williamson made seven saves for the Spartans in the loss.
The Canada West banner is the 15th in the Thunderbirds program.

The University of Saskatchewan will also travel to Acadia and the national championships as the Canada West third seed. Saskatchewan defeated MacEwan 1-0 earlier in the day in the bronze medal match.