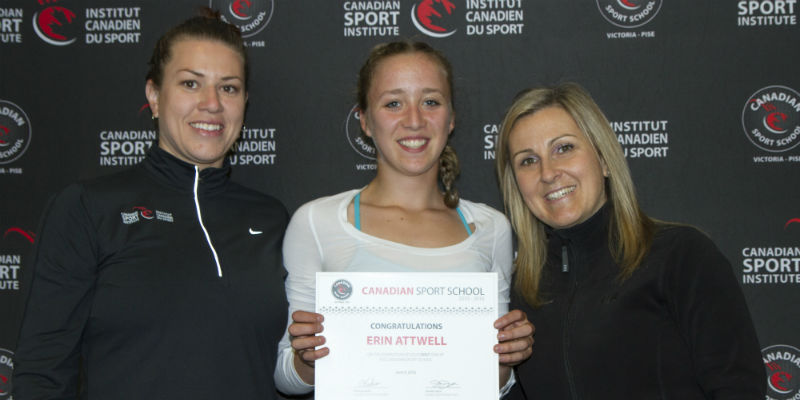 That is the opportunity offered by the Canadian Sports School in Victoria, where elite young athletes spend the afternoons in both academic and physical training, following mornings at their respective high schools.

The five-year-old program, with 30 students from Grade 10-12, is under the auspices of School District 62 and operated by the Canadian Sport Institute-Pacific at its PISE campus.

The school already produced its first Olympic medalist with graduate Charity Williams winning bronze in rugby sevens at Rio 2016. Another alumnus, Caroline Crossley, was also on display last weekend at Westhills Stadium in the Canada Sevens.

The Canadian Sports School introduced its Class of 2017 on Wednesday with a U.S.-style “Signing Day” in which graduating Grade 12s discussed where they are bound.

All-rounder Sophie de Goede of Oak Bay is headed to play rugby and basketball in U Sports at Queen’s University, golfer Keaton Gudz of Spectrum to the Oregon State Beavers of the NCAA Pac-12, and rower Imogen White of Oak Bay to the University of Victoria Vikes.

Canadian cadet Greco-Roman champion Erin Geddie from Esquimalt High was galvanized by watching Erica Wiebe win wrestling gold for Canada at the 2016 Rio Olympics and will follow Wiebe’s path on the mats of the University of Calgary Dinos program. Downhill mountain-biker Josh Dziwenda of Claremont, having already ridden in the Canada Cup, is turning professional on the NZDH Championship Series, the development pro circuit based in New Zealand.

Cyclist Erin Attwell from Maria Montessori Academy and rugby player Julian Foggitt of Belmont are headed to centralized national-team programs, Attwell at the Canadian track cycling centre in Milton, Ont., and Foggitt just across the way to the Rugby Canada Centre of Excellence in Langford.

“[Canadian Sports School] is an amazing multi-sport environment where you are surrounded by like-minded student-athletes who are all striving to be the best at what they do,” said Attwell, the women’s Canadian junior road cycling champion and top-10 at the world junior championships in track cycling pursuit.

“My goal is the Olympics in track cycling. And here we look across and see the [centralized] senior national team athletes in rugby and rowing training right beside us.”

The head coach of the Canadian Sports School is former hammer-thrower Jennifer Joyce, two-time NCAA All-America in the Pac-12 for Cal Berkeley, and silver medalist for Canada in the 2006 Melbourne Commonwealth Games. Handling the academics is the school’s teacher Christina Kadin.

“To say you want to be an Olympian is a normal thing around here,” said Joyce, who competed twice in the world track and field championships.

“If you said that at any other school, people would look at you and say: ‘Whoa.’”

The cross-pollination of ideas from various sports creates a hothouse effect.

“These student-athletes all come from different sports and really push each other. It’s a great environment, both athletically and academically,” said Joyce.