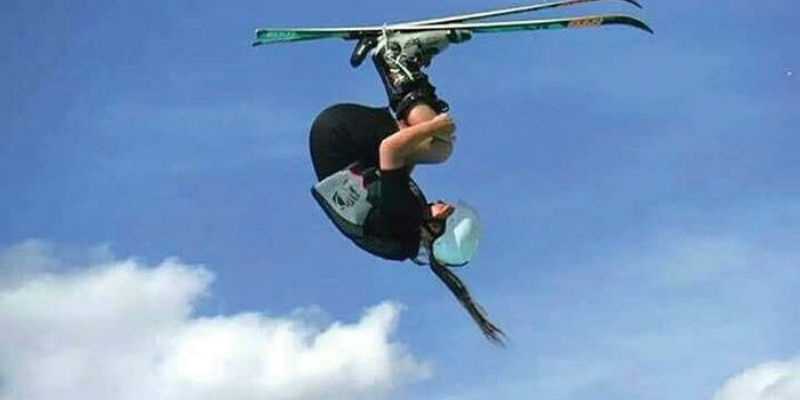 When Emma Benischek straps on her skis and hits the slopes of Mount Washington for freestyle skiing, she feels like she can fly.

It’s a feeling she can barely describe.

“You go off a jump and you feel like you’re flying,” said the 21-year-old. “It’s the coolest thing, I enjoy it so much.”

Freestyle skiing is a discipline comprising of aerials, moguls, cross, half-pipe and slope-style in the Winter Olympics. Skiers can perform aerial flips and spins and can include skiers sliding rails and boxes on their skis.

Emma has been involved with the sport for the past 12 years. Originally an alpine skier, she became friends with a freestyle skier and was immediately interested in trying it.

“It’s fun. You get to go out and try new things and do all these cool tricks that you get to watch on TV,” she said. “Being able to train with Olympic athletes who would come out and help us was really cool.”

Since then, Emma has taken up the sport competitively, competing in junior nationals, provincials and the B.C Winter Games. Most recently, she has tried her hand at judging and coaching.

Emma’s love for the sport has rubbed off on her younger sister, Hannah, 17, who also competes.

However, Hannah was injured while trying to land a front flip at Mt. Washington, tearing her ACL and MCL, as well as both her meniscuses, which sidelined her for about a year.

She admits she was nervous her first time back on the hill after months of rehab, but once she strapped on her boots and skis, her fear disappeared.

“After a couple of times, the fear went away and it was like riding a bicycle, you just know what to do all over again,” Hannah said. “I enjoy being able to learn new things and challenge yourself. It’s really difficult learning new tricks and you can really accomplish a lot.”

Both Emma and Hannah are hoping to teach others about freestyle skiing, this time as coaches. They’ve both been shortlisted to become one of the coaches with the Mount Washington’s Freestyle Ski Club.

This year, the club is reaching out to Greater Victoria residents, hoping to encourage others to try the sport with competitive, development and beginning freestyle programs at Mt. Washington. There are roughly 30 kids ranging in age from six to 16, who have signed up for the upcoming season, a number that’s decreased from previous seasons due to lack of snow fall.

Emma noted there aren’t that many people in the sport currently, meaning it’s slightly easier to compete, while Hannah said freestyle skiing encourages participants to overcome obstacles and pushes them to try new things.

Head coach Peter Stubbs agreed, adding as long as participants have basic ski skills, just like any sport, it’s all about practice.

“It gets you out into the snow and into the fresh air in the mountains where not a lot of people in the world have the ability to do that.”