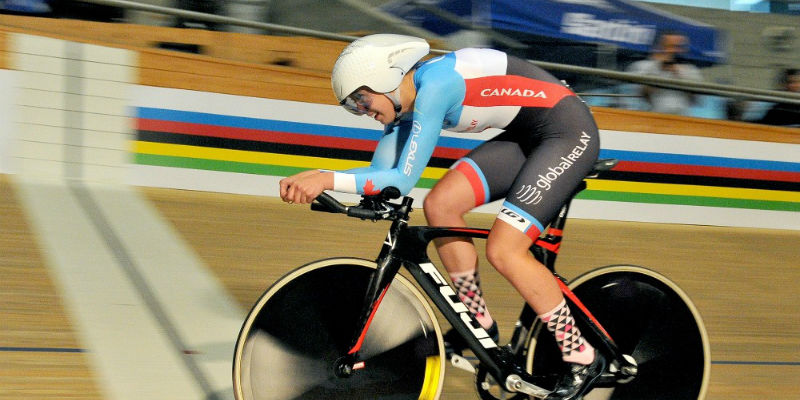 No Saanich athlete had a year as big as Gordon Head’s Erin Attwell, who won gold in the 2016 junior Canadian Road Championship and also set three Canadian records at the Junior Canadian Track Championships. The 17-year-old recently signed on to the semi-pro team Trek Red Truck out of Vancouver. Attwell competed at both the junior world road and track championships this year. She checked in with the Saanich News for a year-end recap.

SN: What were your highlights of the 2016 race season?

EA: I won the junior Road Nationals in Ottawa, Ont., in June as part of Team B.C. We managed to pull off a win. Our team tactics couldn’t have been more perfect. The team worked so well together [including 10th place Holly Henry, a Mount Douglas grad]. It was the most unreal feeling. It took the whole team to pull it off. But going into the last corner with four other girls I knew I could take the sprint, it was a hard day because of the heat (40 C) but I am so proud to own that title. At the 2016 Junior Canadian Track Cycling Championship I set a new Canadian record on the track in the 500-metre team sprint with Maggie Coles-Lyster from Maple Ridge, the 500m individual pursuit (2:27) and the 500m individual time trial (37.034). At the Junior Track World Championship in Aigle, Switzerland, I placed 10th with a time of 2:26.6. I was the first rider on Canada’s women’s team pursuit and we placed fourth.

SN: There is incredible video of you saving yourself from a fall at the World Championships in Qatar. What was the reason for the near-crash?

EA: I had a very close call on the last lap of the five-lap road race. I was unclear of what I had actually hit although people have guessed that it was probably a water bottle. Personally I have no clue how I was able to hold myself upright. I remember coming off my saddle and my hands completely off the bars. It was a bit of a scare but I got myself together and entered the corner with the pack. The race went smoothly after that.

SN: What racing/training do you do this time of year?

EA: At this point in the year my training load is not as heavy as the race season. I incorporate more off-the-bike training into my schedule and more time in the gym working on building up more power. As March approaches I will build up to the 2017 Canadian Track Cycling Championships in Milton, which is the selection event for the 2017 World Junior Track Cycling Championships in China.

SN: Was it your goal to sign with Trek Red Truck?

EA: It will be a good step to start my career as a professional bike racer. My goals for next season will be to gain tactical experience from more seasoned riders, learn to work with a team on and off the bike and to continue to be a student of the sport.

SN: Who did you race for this year and how will it be different next year with Trek Red Truck?

EA: In 2016 I raced under the Bear Mountain-Tripleshot cycling banner. Being on [Trek Red Truck for the 2017 racing season] will give me the opportunity to be part of a team setting, learn from more seasoned riders and get more exposure in bigger races that I wouldn’t have been able to get otherwise racing as an individual.

SN: Crashing is part of cycling. Did you have any major crashes this season?

EA: I actually hadn’t crashed [this season] until the first lap of the road race at Junior Road worlds. Everyone was super nervous in the pack of around 100 girls, bumping bars and bodies became a norm. The crash I was caught up in happened in a straightaway. Everyone started slamming on their brakes and I was a little late and there was a pile up. Catching back on [to the group] took about half a lap. Getting a group to work was easy and we were soon on the back of the main peloton.

SN: Is your long-term cycling goal on the road, track or both?

EA: I have done about an equal amount of time on the road and track and have had similar success. I wouldn’t say that I have a favourite. I really enjoy pursuing both so I think that’s what I do for now. I would love to go to the Olympics and I believe at this stage my best chance would be to follow Canada’s trend of success on the track.

SN: Where are you going to school?

EA: I am currently attending as a half-day student in my Grade 12 year at Maria Montessori and at the Canadian Sport School Victoria out of PISE. The Canadian Sport School provides a great environment and support system for student athletes, allowing them to succeed in their sport. It allows us to take a modified academic course load, focusing on more sport specific courses.