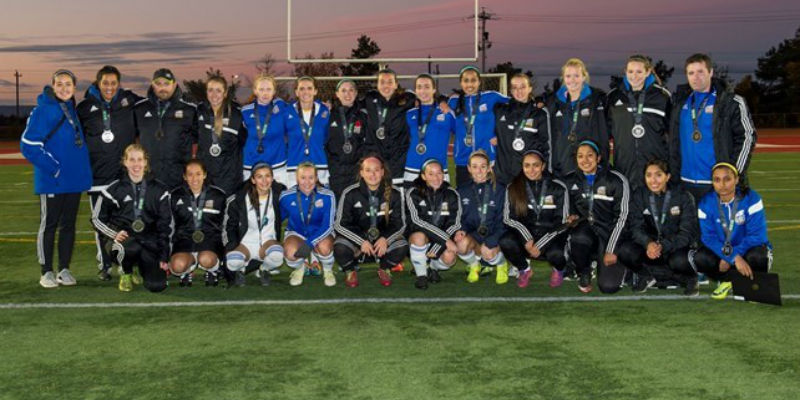 The joy of playing and the drive to keep improving is what has kept a young Victoria woman passionate about playing soccer for most of her life.

Emily Moore, 16, started playing soccer when she was five years old and has not stopped since.

“My dream is to play on the national team,” she said. “But there’s a dream before that, and it’s to play in university.”

Moore, currently a Grade 11 student at Esquimalt High School, also attends the Canadian Sports School at the Pacific Institute for Sport Excellence, where she does physical training and also attends sport performance seminars.

Moore, a goalkeeper, plays for the Victoria Highlanders, in the Metro Women’s League. She described playing on this team as one of her biggest accomplishments.

Dave Dew, head coach of the Highlanders, has been coaching Moore for just over a year.

“She’s very good with all the other players. She’s got a real positive attitude that’s infectious amongst everybody,” he said.

Part of working toward joining Canada’s national soccer team includes earning a scholarship at a top school in either the U.S. or eastern Canada, said Moore.

Recently, Western Washington University invited her down to play with the team and tour the school.

“It was a really good experience,” she said.

Dew said he has already been approached by several universities in Canada and the U.S. inquiring about Moore.

“She is definitely going to get an opportunity,” he said. “She can hit a ball off the ground harder than pretty much any girl in the province.”

Moore’s favourite part of being a goalie is the rush of making a big save for her team.

In 2012, she received the Keeper of the Year award while playing for Victoria’s Gorge FC team.

“She’s got a real confident personality,” said Dew. “She’s one of the top candidates in high school goalkeepers.”