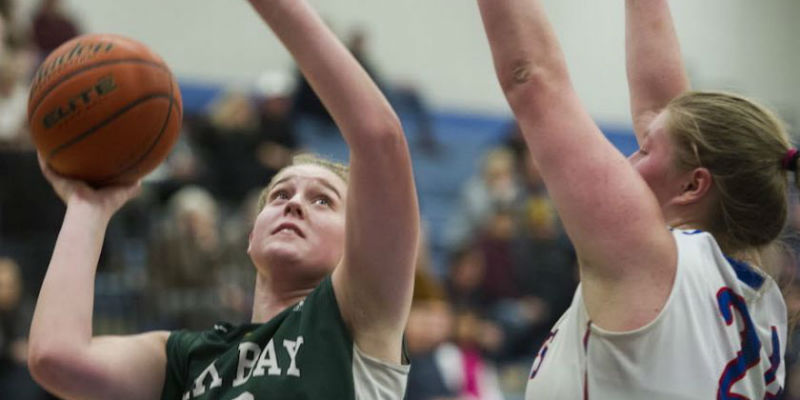 COQUITLAM — Holding a 16-0 record and a No. 1-ranking in the world of B.C. senior girls varsity basketball might make you the favourites in eyes of everyone.

“We view ourselves as the underdogs because we don’t play in a league where we’re going to get great games every night,” said Breakers’ senior guard-forward Sophie de Goede on Saturday after Oak Bay overwhelmed the No. 2-ranked, three-time defending provincial champion Brookswood Bobcats 67-45 in the championship final of the Centennial Top 10 Shoot-Out in Coquitlam. “We just go back to the island, hide out and just keep working and working to get better,” she continued. “And when we get to a tournament, it’s all about our effort and our intensity level.

The Breakers are the only Vancouver Island team in the triple-A tier’s 15 combined top 10 and honourable mention slots, and that means, for the most part, when they want the best competition, they pack their bags, jump a ferry and embrace their underdog persona.

Yet whether you buy what de Goede’s selling or not, you had to believe that their four-quarter effort Saturday was that of an underdog.

It’s one thing to be talented. It’s something entirely different to bring alongside it, a work ethic which outstrips those natural gifts. And that’s why is not entirely wrong to label this team, coached by former Victoria Vikes’ men’s player Rob Kinnear, as both the team to beat, and team of overachievers.

“It definitely gets harder each time we play Brookswood but we kept it pretty simple today,” Kinnear said of the team Oak Bay has played and beaten in all three of its invitational tournament championship wins this season. “We try to be big and athletic and hard-working. That is what I consider to be our greatest strength.”

After falling behind 8-0 in the early going to Brookswood and its hot-shooting Grade 10 guard Jenna Dick, who scored a team-high 23 points, the Breakers made an about-face by leading with their defensive intensity.

Over eight minutes spanning the first and second quarters, Oak Bay allowed Brookswood just a pair of field goals as part of a 20-5 run which had them up 20-13. Brookswood would never be as close the rest of the contest.

And afterward, the Breakers admitted there was no assignment bigger than finding a way to slow the Bobcats’ deluxe senior scoring machine Louise Forsyth.

And if you think that’s easy, consider that the Gonzaga-bound Forsyth, in her team’s loss to Abbotsford in the championship final of the Tsumura Basketball Invitational in mid-December, scored 36 of her 41 points in a span of three quarters.

“I thought Nat was player of the game,” said de Goede, “because I think trying to slow down Louise is the hardest job in the province. Today, she did it better than anyone I have seen in my three years (of senior varsity) basketball.”

Four players hit double-figures on the night, led by 6-foot-2 Grade 11 forward Georgia Alexander, who scored 17. Froese had 12, while de Goede and post Imogen White each had 11.

Before the tournament began, Kinnear admitted no one on his team had scored 20 points in a single game all season. And when that stat was brought to de Goede’s attention, the tournament MVP’s answer was so on-point in terms of speaking to the unselfish tendencies such a stat promotes that you could almost hear her preaching it after a practice back in her team’s Victoria gym.

“To me, in a weird kind of way, that represents a hustle stat,” said de Goede, likening the sacrifice to the kinds of actions which make up the grittiest part of the game’s DNA like steals, deflections, blocks, charges-taken and offensive rebounds. “We pride ourselves on that, and so I love that stat.”

And in the end, as the Breakers prepared to board a ferry and go back to their so-called hide-out in the provincial capital, they left the rest of the province with plenty of questions to ask themselves.

If anyone other team can answer ‘Yes’ to all three of those questions, then the winner of B.C. title this March is still in doubt.

For the Seycove Seyhawks, it’s all systems go on the road to March Madness.

The North Vancouver double-A squad dropped out of the provincial No. 1 ranking slot this weekend but used the Centennial Top 10 Shoot-Out tournament to revive their hoops mojo.

Ashley Bradshaw scored 11 of her 19 points in key moments of the fourth quarter, helping the Seyhawks hold off the triple-A No. 4 Lord Tweedsmuir Panthers of Surrey 93-86.

“Ashley was really good,” said Seyhawks head coach Darcy Grant. “They were pressing us in our own zone, but once we cleared that first level, Ashley was wide open. She really wanted this win against Lord Tweedsmuir.”

Over a span of just under four minutes in the late going, Bradshaw found herself the recipient of four well-placed entry passes, each time the ball reaching her on the way to the basket for lay-ups.’

The fourth, with 1:27 remaining, gave the Seyhawks an 89-79 lead. And Seycove needed everything they could because Tweedsmuir guard Maryn Budiman threw everything she had at her foes, finishing with 42 points, including five triples and seven-of-seven shooting from the stripe.

Shelvin Grewal’s trey with 13 seconds remaining pulled the Panthers to within seven points.

A key sign of the depth and confidence of the Seyhawks who last season finished second in B.C. at their tier?

When post Sage Stobbart left the game for a short stretch late in the fourth with her fourth foul, and took her team-high 31 points with her, panic never set in.

“The girls are far more mature than last year,” said Grant, “and Sage is incredible but for most part they played a little bit more poised and together. We came close to a complete game today and we hope to build on that for the rest of the season.”

Shelvin Grewal had 16 points and Brianne Boufford 12 for the Panthers.

The Owls flew to victory on the strength of a 20-0 first-quarter ending run put them ahead 25-11, then held Argyle to 17 points in the second half en route to a 22-point victory.

Arman Sahota scored 19 of her game-high 24 points in the second half as Surrey’s Panorama Ridge Thunder outscored the Panthers 50-21 over the final 20 minutes en route to a decisive victory.

Simrit Dosanjh added 22 points for the winner and Zainab Khan a further 12.

Marin Lenz also scored a game-high 24 points in the loss for the Panthers.

Chloe Brebner scored 18 points to lead the Eagles, while Gabby Channon and Georgia Nelson with 11 points, and Tanis Metcalfe with 10 also broke double figures in scoring.

The Grizzlies used a 15-0 run early in the third quarter to open their lead to 52-32, getting an additional 10 points from Lauren Campbell.

Jessica Wolpert’s 22 points, as well as 18 from Nikki Cabuco and 13 from Kendal Sands carried Coquitlam’s Blue Devils to a 10-point win over the Hyacks.

New West’s 14-2 run to start the fourth quarter pulled them to within a pint at 46-45, but from that point forward the Blue Devils reeled off a 14-5 game-closing run.

Grace Killins was fouled from three-point range with no time left in the fourth quarter clock and proceeded to cooly sink all three of her free throws, forcing overtime and helping the host Centaurs to a 64-60 win over North Vancouver’s Royals.

Julia Strigl and Emily Wood each scored 16 points for the Royals, who got a further 15 from Samantha Magelund.

The Royals were held without a point in the overtime.