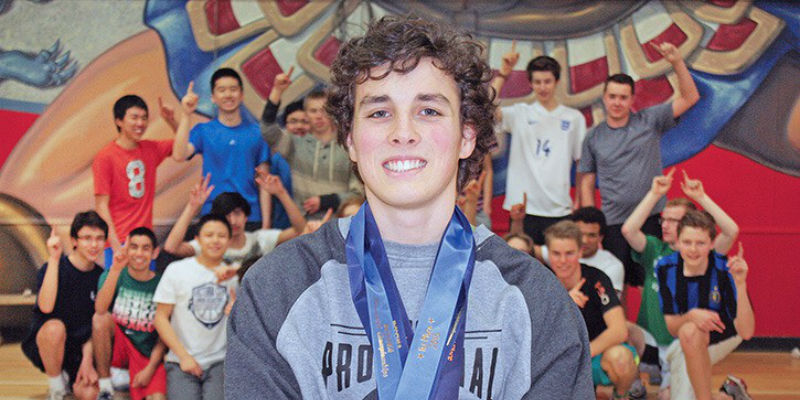 Calm, careful and calculated, Nolan Mitchell searches out his words like he executes his moves on the wrestling mat.

The Grade 12 Claremont secondary student quietly won his fourth straight B.C. High School Wrestling Championship gold medal on Saturday, but he’s not bragging. However, he’s no longer the rogue wrestler he was, a shy Grade 9 student who happily slid under the radar as the school’s unknown provincial champion.

“It feels fantastic (to win), especially with the rough season I’ve had,” Mitchell said.

Mitchell is quite possibly Claremont’s top athlete, despite not wrestling competitively at all this season until he arrived at the provincials in Abbotsford last week.

After winning the B.C. championships from 2012 to 2014, a broken ankle in August stunted Mitchell’s start to the 2014-15 season. When he returned prior to Christmas, he contracted mono and was held from training until early February.

“I went into provincials with three weeks of preparation. It took a lot of hard work to stay the course after such devastating setbacks but it made winning my fourth B.C. gold medal that much sweeter,” he said.

While there is no wrestling program at Claremont – Mitchell has commuted to Duncan the past five years to train there and only represents Claremont at the Island and provincial championships – he’s hoping there’s a growing interest.

Mitchell also instructs wrestling, among other sports, as an assistant to P.E. teacher Carmine Sparanese.

“He’s an ambassador of the sport, the kids automatically respect him and buy in when he’s talking,” Sparanese said.

Mitchell will graduate and head to university this year, leaving behind four championship banners among the many on Claremont’s wall of fame in the gymnasium.

In Abbotsford last week, Mitchell managed to beat Campbell River’s Mike Herman in the semifinal and then Surrey’s Amar Atwal in the 54-kilogram gold final.

That he did it on three weeks training proves his discipline.

“There is no replacement for competitive matches,” Mitchell said. “With that being said it was a tough journey to try and prepare in three weeks. However, I felt confident in my experience and being mentally ready.”

Qualifying for provincials is another story, as he had to petition to get in. Because his spleen was still swollen he wasn’t ready for the Island championships, he needed special permission for provincials.

As for university, he’s currently weighing his school option and setting his sights on the 2016 Junior National Wrestling Championships.

Thus ends the Nolan Mitchell wrestling era at Claremont, though the school is never one to write off. It wouldn’t surprise Sparanese if a wrestling program was born in the next few years.

“Ten years ago, there was no Claremont golf or swim academy, so never say never around here,” said Sparanese, who taught Mitchell at Royal Oak Middle School.

“It would take the help of a committed coach, it needs someone who is willing to put in the time to recruit and develop the wealth of athletes at Claremont,” Mitchell said.

Grade 8 Saanich wrestler Kiana Shew (40 kgs), who won gold at Islands, also competed at provincials and won silver, losing the gold medal to a much older Grade 12 student. Shew is home schooled and represented SIDES as well as the Greater Victoria Commonwealth Bulldogs. Donovan Huynh also represented from the Bulldogs.