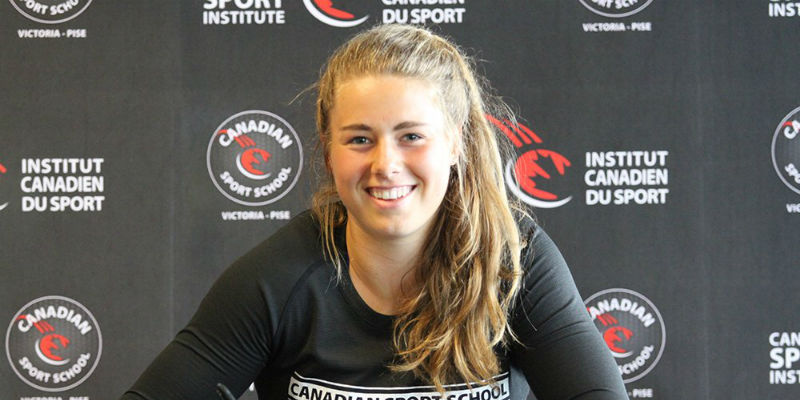 Victoria, BC – The Canadian Sport School recognized its seven graduating student-athletes during a “Signing Day” celebration on Wednesday at the Canadian Sport Institute Pacific’s campus at PISE.

The Canadian Sport School provides athletic and academic support for secondary student-athletes who are balancing their educational and high performance training demands.

The program helps to alleviate the pressures experienced by high performance secondary school athletes. With a dedicated coach and teacher, the Canadian Sport School ensures that Canada’s future Olympians and National Team members have all the skills and resources needed to continue to progress as high performance athletes, while excelling both on the playing field and in the classroom.

A second-year student-athlete in the Canadian Sport School, Erin Attwell will wrap up her decorated junior cycling career this summer. Attwell, who has already earned a spot at the Junior Track World Championships, will aim to qualify for the Road Cycling World Championships and attend two world championships for the second consecutive year. She will also be racing in 2017 with Trek Red Truck Racing based out of Vancouver while continuing to train with the Mountain Bike NextGen training group in Victoria before transitioning to the Track Cycling NextGen program next fall in Milton, Ontario.

Sophie de Goede’s final year of high school was nothing if not busy. A talented athlete who stars in both rugby and basketball, de Goede found herself playing at high levels of both sports and with multiple options for pursing her athlete future. De Goede joined Rugby Canada’s centralized women’s rugby sevens program this fall and was later named their Young Female Player of the Year. She also played a leading role with a dominant Oak Bay senior girls’ basketball team that won 28 straight games. She will have the chance to play both sports next fall as she suits up for the Golden Gaels.

Following two years at the Canadian Sport School, Josh Dziwenka is hitting the professional mountain bike circuit. Next year Dziwenka will travel to New Zealand where he will compete in the NZDH Championship Series, a developmental competition for downhill racing. Until then, Dziwneka will continue to ride locally, having already taken part this year in Pro GRT and Canada Cup events. When he returns from New Zealand, he plans to register with Chinook Helicopters Flight Training School in Abbotsford, BC.

After a pair of selections with Rugby Canada over the past two years, Julian Foggitt will stay close to home next fall. Foggitt, who attends Belmont Secondary School just minutes away from Rugby Canada headquarters in Langford, has set his sights on future opportunities in rugby with the Under-19 and Under-20 national teams. He was a member of Canada’s U17 Rugby 15s team as well as the Canadian 15s team at the Rugby Europe U18 Open Championships.

Like so many young Canadian wrestlers, Erin Geddie could not help but be inspired by Erica Wiebe’s gold medal performance at the Rio Olympics. Now the 2017 Cadet National Champion in Greco-Roman wrestling is following in her idol’s footsteps, joining the Dinos Wrestling team. Over the past 12 months, she has represented Canada at the Cadet Pan American Championships in Lima, Peru, where she won a gold medal in the 70kg category, as well as the World Championships in Tbilisi, Georgia.

The 2017 golf season has gotten off to a roaring start for Keaton Gudz. After announcing his commitment to Oregon State in the fall, Gudz has gone on to pick up four wins in the Vikes Junior Tour in Victoria and earned an amateur exemption for the Bayview Place Cardtronics Open, a PGA Canada event. The third-year student-athlete at Canadian Sport School will now have the opportunity to test himself against some of Canada’s top golfers, including some on the cusp of making the PGA.

Imogen White will remain in her hometown next year and take advantage of the wealth of knowledge available to her in Victoria. Prior to joining the Canadian Sport School this year, White has also been part of the Canadian Sport Institute Pacific’s Rowing NextGen program, coached by Barney Williams. As part of the Vikes Rowing program, White will continue to train with some of Canada’s top rowers and remain close to Rowing Canada coaches.