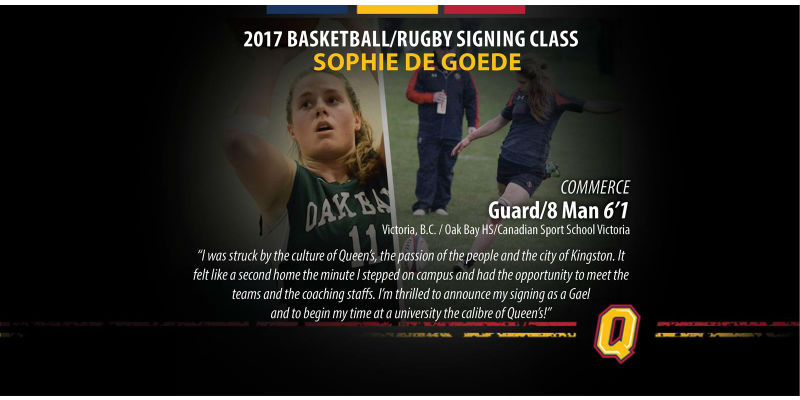 De Goede comes to Queen’s from Victoria, B.C. out of Oak Bay High School and the Canadian Sport School in Victoria. Her rugby experience includes being a carded athlete with the National Senior Women’s Rugby 7s program, was Team Captain of Canada U18 Rugby 7s Team at the Youth Commonwealth Games, Team Captain and Rugby 7s Member of U18 Canada Rugby 15s Team in 2016 and was named the Rugby Canada Young Female Player of the Year in 2016. As a basketball player she is a National Championships Targeted Athlete with Basketball B.C. and an invitee to Basketball Canada ID Camps. In 2016 she co-captained the Basketball B.C. team and in 2015 was a First Team All-Star at Basketball Nationals. At the B.C. provincial basketball championships she was also honored as the Quinn Keast scholarship recipient.

“The signing of Sophie is a unique situation, as she will be competing for Queen’s in both Rugby and Basketball,” said Wilson.  “Normally I would say this cannot be done; not play two sports and be successful academically.  However, Sophie is a unique individual – not only a National level Rugby player and Basketball player, but a gifted academic as well.  The combination of her organizational skills and her fierce competitiveness, both on the field of play and in the classroom, will allow her to excel at all three endeavors.

As a basketball player, Sophie excels on defense and around the boards.  A tenacious rebounder, she has great instincts at finding the ball off the rim.  Her size, strength and quickness allow her to cover most positions on the floor, while possessing the ball handling skills to play both inside and outside on the offensive end of the court.  With the combination of versatility and unrelenting competitiveness, she will make a name for herself in a Gaels uniform in very short order.”

The women’s rugby program is also looking forward to adding such a high caliber athlete to their team.

“Sophie’s choice to come to Queen’s this fall and to balance not only two sports but a challenging academic program as well is a testament to the type of person she is; truly one of a kind,” said Barz on the newest Gael. “She is not only aware of the opportunities that lie ahead but also has more than adequately prepared for them even before her arrival on campus.

From a rugby perspective, Sophie’s strengths are multifaceted, and many apply to both basketball and rugby. In attack, she has excellent vision and hands which combined with a relentless work ethic make for an explosive combination for not only herself but her teammates around her. She craves the physicality of rugby where she can use her aggressiveness and competitive edge to fuel contact and turnover opportunities in defense.

Finally, Sophie carries herself with the maturity of a much more experienced student-athlete. Her greatest personal characteristic is her humility and her recognition that the team is greater than the sum of its parts. We’re delighted to Sophie to be a part of our Gaels team this fall.”