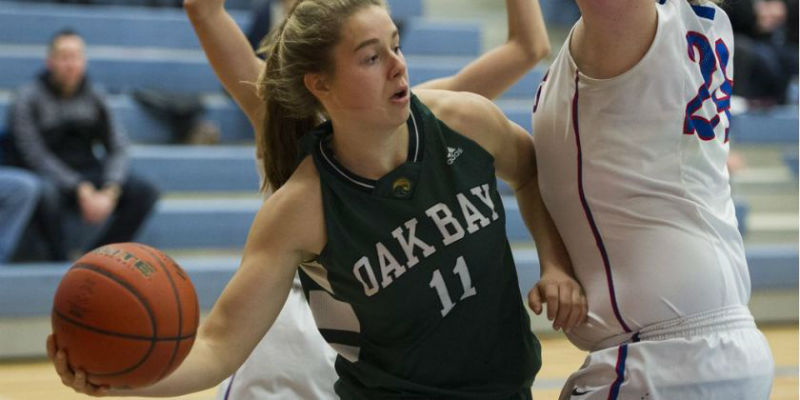 LANGLEY — The big question heading into the 2015 Telus B.C. senior girls Triple A basketball championships was, which teams would knock off one of the field’s vaunted big four off its pedestal, keeping it from an appearance on Final Four Friday.

Well the answer following four quarterfinal games Thursday at the Langley Events Centre wound up being none, but Richmond’s R.A. McMath Wildcats and the Dr. Charles Best Blue Devils of Coquitlam not only came close, they served notice that 12 months from now, they may well be the ones preparing for provincial semifinal action.

On the Double A side of the ledger, the pundits predicted that the Lower Mainland’s overall strength would shine through late in the proceedings. With the Final Four set for Friday, they were bang on. Three Lower Mainland schools, all privates, welcome another from Kelowna.

First the scoreboard, then our game-by-game breakdown by tiers:

Here’s our look at the quarterfinal round:

In a game that featured 14 lead changes and six ties, with no team leading by more than nine points, it was a game whose outcome could not be pinned down to one factor.

“But Brittany hit a huge shot when she drained that three,” Mouat head coach Paula Thompson said after senior starting guard Brittany Wertman, quiet most of the night, stepped up and flushed a baseline triple late in the contest, a shot which was just enough to turn the tide and start sending the Hawks to the free-throw line and keep the possession count in their favour.”

Once again the Sisters Roufosse were fantastic, the twins combining for 40 points and 20 rebounds.

Alicia Roufosse led the way with 22 points and 18 rebounds, while Cierra Roufosse had 18 points and eight rebounds before fouling out with about six minutes remaining in the contest. Penielle M’Bikata had 14 points.

McMath, looking like a top three team next season, was once again led by the play of Grade 11 guard Jessica Jones.

The shot-creating sensation with the smooth step-back game finished with a game-high 30 points.

“What a great game Jessica played,” added Thompson. “We kept face-guarding her and she still kept hitting all of those shots.”

Jessica Zawada added 10 points and eight rebounds for a McMath team which will finish its first-ever trip to Triple A provincials on the consolation side of the draw but return virtually every player from its deep rotation next season.

Alanna Hind’s trey with 20.7 seconds remaining pulled the Blue Devils  to within 60-57 of the favoured Rapids, but Riverside was able to take it home in the most dramatic game of the Triple A championship draw on Thursday.

Playing a largely seven-player rotation on Thursday, five of whom return next season, the Blue Devils rallied back from a 42-29 deficit early in the third quarter to lead 47-44 heading into the fourth.

“I am an old softball guy and we used to talk about how if you could beat a team three times, a quality team, then you owned them in the hip-pocket,” said Riverside head coach Paul Langford, “but that third win is always a nightmare.

“But we’ve also played these guys a million times, we’ve played them in spring, in the fall, our kids now each other, they play on the same teams in the summer.”

The crosstown battle was a classic but in the end, it was a huge bunch of Zuzia Zdziechwoski in the first half, and a lot of Shae Sanchez late that wound up being the difference.

Zdziechwoski scored 21 of her 24 points in the first half and also finished with 13 rebounds, while Sanchez, who struggled to a 2-of-11 shooting night, made up for it with aggressive play late, the majority of her 12 points coming over the stretch drive on 7-of-8 free throw shooting. Stephanie West finished with 10 points and Ozi Nwabuko nine points and 13 rebounds.

The Blue Devils were led by the 24 points of guard Anastasia Evans, who like Sanchez, logged the full 40 minutes. Shanta Borrego had 11 points and 10 rebounds, and Hind nine points.

And while Best was a newcomer who came very close to crashing the Final Four, Langford said afterwards that pre-season indications for his Rapids were that they were still a full season away from blooming.

“Well, this team is so weird,” said Langford, fighting back tears. “We went to the first tournament and won it, and this was supposed to be our get-ready-for-next-year team. But then we won the Mouat tournament, and then went to Victoria and won that. It wasn’t until our last game before Christmas that we actually lost. So we were 17-1 with a one-point loss. But then when we don’t play a team in the top four, lots of times, we don’t play.

“But that said, we played in the Tessa Tournament and beat Oak Bay by 16. It has been like someone put me in the seat of a new car I wasn’t supposed to be driving. But Best they are going to be great next year.”

For most of Friday they played like they already were.

Sophie de Goede, in case you didn’t know, is one of the province’s best all-round players.

On Thursday, the athletic, hard-nosed, heart-and-soul player with the Oak Bay Breakers scored a game-high 28 points and grabbed 12 rebounds, leading the Victorians to a 19-point win over Abbotsford’s Eagles.

Lauren Yearwood was an efficient 6-of-8 from the field for 12 points and 13 rebounds while starters Morgan Roskelley, Andrea Psotka and Jahniaa Thomas combined for 24 points and 19 rebounds.

Oak Bay was all about early execution, shooting 62 per cent from the field in the first half and opening up a 42-27 halftime lead over the Eagles. Taylor Claggett and Gabriele Cousins each scored 15 points to lead the Eagles, but Claggett was held to 5-of-23 shooting by de Goede and the Breakers.

Aislinn Konig shot 53 per cent from the field (18-of-34) and scored a game-high 39 points, and also grabbed a game-high 11 rebounds to lead the defending champion Bobcats to a 75-51 win over the Kelowna Owls.

Forward Tayla Jackson shot just 3-of-14 from the field but used 12 free throw trips to finish with 15 points and her nine rebounds, seven assists and three steals were indicative of the other ways in which she helped control the contest.

Immaculata has yet to face a Lower Mainland school here at the B.C. championships but there wait will be over in Friday’s semifinals.

Kelowna’s finest rolled to a convincing win over the tourney first-timers from Parksville, as Ashlyn Day put forth a clinical 33-point performance on 15-of-25 shooting. But more than anything, it was the Mustangs’ third-defence that carried the day.

Immaculata outscored the Whalers 21-2 in the third quarter. Emma Johnson added 17 points for the winners, while Chelsea Hoey had 21 for Ballenas.

A Final Four team last season, the Knights are back to the semifinals after its dynamic duo got down to work Thursday against North Vancouver’s Seyhawks.

Leilani Carney with 24 points and Zion Corrales Nelson with 22 led the Knights who built a lead as large as 23-points (56-33) in the third quarter.

Jessica Hanson and Alessia Risi have their Angels in the final four.

The UBC-bound guard Hanson scored a game-high 30 points, with seven rebounds and four steals to boot, as Vancouver’s LFA halted any hopes that North Vancouver’s St Thomas Aquinas Fighting Saints may have had about returning to the 2015 championship game.

And Rissi, with 22 points, 11 rebound and six assists, also shone as Angels jumped out to a 26-13 first-quarter lead, enough to withstand an 11-1 run the Fighting Saints would mount later in the contest.

Fresh off its win over Fraser Valley champion Holy Cross the night before, STA 14 points from Taylor Prescott, 13 apiece fro Nicole Wong and Amelia Williams and 12 points from Sierra Scheffer.

On Thursday, however they won the game that mattered most.

Lauren Bondi scored a game-high 26 points, and Trisha Francia had 27 points, 10 rebounds and six assists the Vancouver school beat the Prince George powers. Bondi’s trey, with her team down by two, proved to be the winning shot.

Marcie Schlick, the Condors’ 6-foot-4 post, had 14 points and 21 rebounds, while guard Alina Shakirova had 18 points and forward Madison Landry 12.