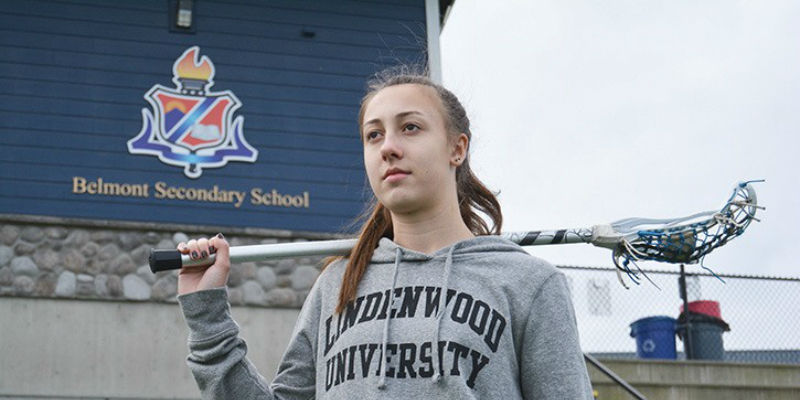 When Paige Sutton was introduced to lacrosse at the age of four, none of the boys on her team would pass to her. Discouraged, she gave up the sport for a period of time and moved on to other things.

Twelve years later, those early memories seem a lifetime ago.

“I didn’t know what to say. It was just so surreal,” she said about the day she was presented the offer.

The opportunity is the result of years of hard work and dedication put in by both the player and her parents, Dean and Tracy.

Paige previously played for select squads out of Burnaby and Seattle, but recently latched on with a program called The X-Team, which aims to prepare players for NCAA lacrosse.

“It’s a virtual team, so you train at home and they give you all the training and the help for recruiting … you just do it all on your own and then we meet for training camps and tournaments, because everyone is from all over,” she explained.

One of the squad’s midfield and attacking players, Sutton has competed in tournaments across the U.S., including in Illinois, Maryland and Florida. On Jan. 14 and 15, she’ll be in California to compete in a tournament known as Sandstorm.

Playing at this level of competition garnered her a lot of attention from American schools, and the full ride from Lindenwood turned out to be just one of several offers the Colwood resident received.

Sutton originally figured she’d find a school on the West Coast, but the Missouri university separated itself from the competition by wowing her on a tour of the school’s facilities.

“I just absolutely fell in love with the campus and the whole atmosphere,” she said.

“They have such nice facilities. Their locker room is one of the best I’ve seen in my entire life. They say they (compare) to NFL locker rooms.”

While expenses, especially ferry receipts and boarding passes, have piled up over the past few years, Sutton’s parents see their daughter’s accomplishments as the perfect return on their investment, one they say they wouldn’t have considered had they not believed Paige was committed to achieving her goals.

“She was up at six o’clock in the morning playing wall ball in the garage, working out and training,” Dean said.

“She worked really hard and it’s nice to see that actually pay off,” Tracy added.

Still over a year away from graduation and her eventual move to Missouri, Sutton isn’t sure what her lacrosse life will look like over the short term. Locally, she captains her Pacific Rim Field Lacrosse team, but her stint on The X-Team will wrap up with the Sandstorm tournament and then she’ll have the option to try out for a few different travel teams in the region.

Wherever she ends up playing prior to the start of her NCAA career, she’ll certainly be working hard to get ready for the next level.

Asked what areas in which she believes she can improve, she said, “I think I see the field pretty well. But definitely seeing all of the options within the field, and not just team options but individual options.”

More than a decade after some selfish teammates turned her away from the game, it’s finally her turn to take the rock.