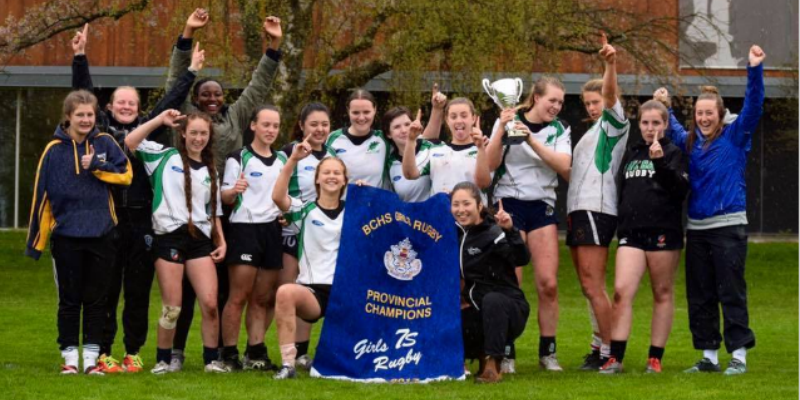 Oak Bay athletes showed character and heart and came away the champions, according to their coach.

“They played their hearts out,” said Coach Jess Neilson. “In the semi-finals against Shawinigan Lake they played goal line defense, it was pure heart, it was pretty cool.”

She said it was neat to see how the team has progressed from two months ago.

“It was an amazing weekend.”

Manager of the team, David Crossley said there has always been a lot of athletic talent in Oak Bay.

“All the good athletes are in demand there, this team certainly made it’s mark with their second provincial championship.”

Oak Bay won their pool games facing opposition from around the province – Lake City (Williams Lake), Elgin Park, and Westsyde (Kamloops). In the final game Oak Bay defeated Belmont 15-10 with a try right at the end of the game.

“Victoria didn’t have a lot of presence in the girls’ game before and we blazed trail to get it established in the high school,” said Crossley.

Many local high schools now participate with more than 12 teams this year. This is the first provincials to have two lower Victoria battle in the final.

The Oak Bay girls now begin Lower Island League play. Neilson said it is kind of backwards, they won the provincials, now they play the school leagues until the end of June.