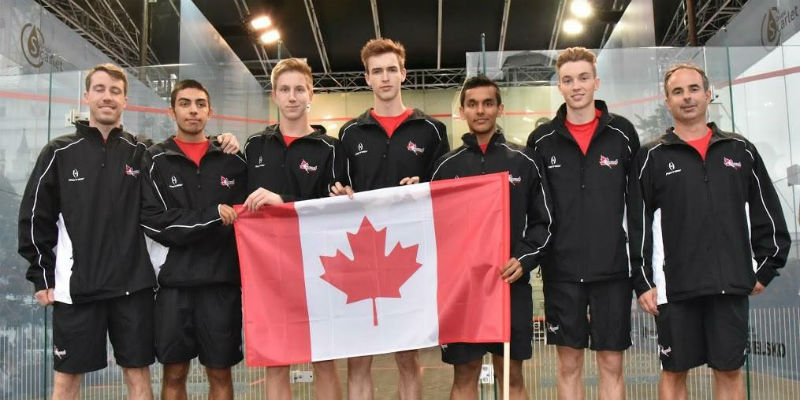 After all the matches were played we had the closing ceremony which included a dinner and dance as well as the medal presentation. This was the perfect way to end our awesome trip because it gave us a chance to say good bye to our new friends and congratulate people on their accomplishments. This event went very late into the night and was worth staying up for but we had a 5:00 am flight we had to get up for.

The next morning we were all very tired but happy to be heading home. We had a five hour flight back to Toronto which we were all sleeping on and then we split ways. After we landed everyone except for Ben and I parted ways. None of us will ever forget this awesome trip we had together and from their we said our goodbyes.

Ben and I were not home yet, we had a couple hours at the airport in Toronto then we had another five hour flight to victoria. We landed safely and were happy to be home after a tough and exciting week in San Salvador.

This trip was one of the best trips I have ever been on and it would have never been posibble without your help so thank you all so very much for all the support! Hopefully in the future I will be able to further represent Canada, BC, and Cedar Hill in even more international and national events. Thank you again for all your help.

Today we started the day with a even earlier match then yesterday. We played Guatamala at 8:15 with David ( our number one) still feeling sick. So Devin started us off also feeling very sick but finished strong with three to one victory. This was a special win for him because it is the very last junior squash game/event he will ever play. Next up we had Matt playing in position one. He was a little nervous again playing in position one but he finished strong with a very close three-two match. To finish us off we had Stefan take down Guatamala’s number 2 in a quick, but close match.

After our match this morning Devin starting feeling even worse but David started to feel better which was both good and bad. So for our final game against Paraguay we put David back at number one, myself at number 2, and Stefan at number 3; we gave Devin a well needed rest. Even though David was not feeling to good, he managed to take down Paraguay’s number one in three very close games. Stefan won his game in three very quick and not so close games. I finished off winning my last match in four games. It was a very good match with a very respectful opponent.

We are done ! We will have closing ceremonies tonight with all the medals and awards. But before the medal ceremony we will take one last swim in the pool.  This trip has been an amazing experience and tons of fun; so thank you all so much for this amazing opportunity! There will be a couple more posts with more pictures and a summary of the trip as a whole, maybe some behind the scenes excitement. so stay posted.

Our day started off with a early 9:00 am start by playing Brazil. The day brought some unfortunate events as well as some good ones. Our number one, David caught the flu this morning and was feeling it all day. This meant that our order of play would change, we had Matthew at number one, Stefan at number two, and Devin at number three.

Matthew started it off a little nervous because he was playing position one, but he overcame it and won 3-0. Stefan had a close game with a couple of good come backs but he also finished with a strong 3-0. To finish of the day with Brazil we had Devin also win 3-0.

After our matches were finished David was feeling very poor and we had to go back to the hotel so he could rest. We decided to go check out the mall that was close by because we had the rest of the day off. David stayed at the hotel but the rest of us went and hope for cheaper prices, but they ended up being very similar except for food. This is when Devin started to feel sick aswell, so we went back to the hotel and everyone had a good rest.

We will be playing Guatamala tomorrow at 8:15 sharp which will be a very early start. Our starting line up will be the same as today with Brazil, Matt at one, Stefan at two, and Devin at three. Hopefully this flu is only a short term thing and Devin and David will be ready to go for tomorrow. We are still very determined to finished the best we possibly can and that means we must get through Guatamala tomorrow.

This is one of the hardest posts I will have to write.  We have returned to the hotel and we are exhausted from the day’s events.  I am sorry not to give all the detail in Technicolor for your high definition review but I am too disappointed to describe the full days events fairly.

Our day started off with our encounter against Ecuador.  Due to miscommunication we had to default the first two matches of the day.  This was a heart breaking reality for the whole team as Ecuador was the third strongest in the pool and we started the day with a 2-1 loss to Ecuador.  Through the day there was much discussion as the root of the problem but in the end the decision stood and we lost the encounter.

Not to be deterred we had a second match in the afternoon.  This time we would be playing the #2 team in our round robin pool, Mexico.  We calculated the numbers and we were not out of the running yet, but we needed to pull out a 2-1 win over Mexico.

(Aside:  for Team Canada to medal a third time in the boys event we needed to finish top 2 in our pool.  The loss against Ecuador, meant we had to play for a 3 way tie in the pool between Ecuador, Mexico, and ourselves.  In the event of the 3 way tie the tie is broken by the team with the most matches won, and our single win over Ecuador would put us ahead of them if we beat Mexico)

The Mexico match-up started at 4:30pm and right from the start there was a different feel to the match.  After the warm-up we took pictures with the opposing team.  All the team members greeted each other and exchange pre-match words in broken English and Spanish.

Matthew Henderson was our lead off man in #2 position.  He was up against Enfrain Salazar whose two cousins both are top 100 world ranked players.  Matthew battled valiantly against the older Mexican.  Holding even point for point and winner for winner with Salazar, up to 8-8, but lost the first game.  In the second game Matthew lost control of the match mid-game when the crafty Mexican started playing the referee for lets and strokes fishing for calls and disrupting the pace of the match any way he could and eventually sneaking out a lead and closing up 2 games in the lead.  In the third the confidence of the more experienced player controlled the momentum of the match right to the end.  Matt had no chance to get back in this one.

You remember Hector, our Canadian friend who came to visit us earlier this week?  He came back to watch us play again.  Hector was a positive influence on the team.  His presence raised our spirits and it was good to have a hometown supporter.

Stefan Houbtchev started our second match with Guillermo Cortez.  Cortez is an unbelievably smoother striker of the ball.  His control over the ball and Stefan was great but not complete.  Stefan was able to rally with Cortez and set up the points and rallies.  In the end it was Stefan who’s unforced errors were the deciding factor.  Hitting 3 more tins than your opponent means they play the game to 8 while you have to play to 11.

Yes we are two down, and yes that puts us out of the top 2 positions in the round robin play, and out of medal contention.  We were not going to stop there, David still had to play and Alejandro Reyes was ready to go.  Mexico was determined to beat us not 2-1 but 3-0.  David had a different idea in mind.  If you have seen this year’s Canadian Junior National Champion play you know his determination and his powerful ball striking are scary.  After many long rallies David lead his opponent using a variety of power, speedy retrieval, gentle touch in the front and lobs to wrong foot his opponent.  David was able to hit dying length, and obtain the elusive “no let” from the referee.  After 30min David won the last match of the encounter 3-0.

Tomorrow morning we play Brasil and we will continue in the afternoon with draw play to play to our highest possible finish of 7th place.  There still remains a minimum of 3 matches for us to play.  We still have a job to do tomorrow.

It’s 8:00am in San Salvador and we are waiting for the bus to take us to Maya Country Club for our first round of play in the team competition. Now that the teams are starting things are stepping up a notch. Posts will be small and more frequent.

This morning we have a 9:00 am encounter with Ecuador. We have decided to play 4,3,1 (Devin Hinchey, Stefan Houbtchev, David Baillargeon). This afternoon we will meet with Mexico and tomorrow morning we finish round robin play against Brasil.

Day 4: Getting ready for Battle

First up!  Matthew Henderson and Devin Hinchey on the courts court against the home crowd favourites El Salvador’s, Israel Ernesto Abrego and Juan Pablo Mejía.  So far the loudest audience support has been for El Salvador.  Is it a fair advantage when the audience buys local whistles and horns to cheer for the team?  I don’t know but it does make for an exciting match.  Although we did take a little wind out of their sails as they banged the benches BANG-BANG-BANG SAL-VA-DOR, BANG-BANG-BANG SAL-VA-DOR, which we promptly followed up with one loud CA-NA-DA, which in their surprise they laughed then went shhhh! With the atmosphere set Matthew and Devin had a big road ahead of them.

We started our match at 12:45 and played a long tough match with Devin on the forehand side and myself on the backhand side. The home team, El Salvador were a strong and patient team with a loud crowd cheering them on. We tried our best to make it to the finals but they stopped us after two games. The games were close and intense but the tin got the best of us. We were disappointed with the loss but are very happy with a bronze medal!

After our match this morning we recovered beside the pool then had the opportunity to go up a near by volcano. This was an awesome sight; this massive volcano took us 20 min to drive up to its steep winding road to an elevation of 1800 m. We got to see the awesome views down 500 m to the bottom of the caldera and also talked to the locals who had little tourist shops set up. All in all the day was awesome! Even with the unfortunate loss to El Salvador we still got a bronze medal in doubles and visited one of the highest points on the island.