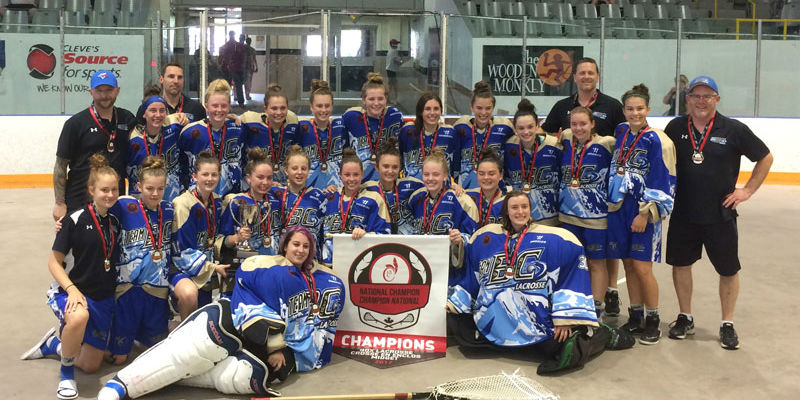 From July 17-21, players and their families experienced a good dose of Maritime hospitality during the CLA’s first national championship of the year. The event, termed #HaliLax on social media, featured some very competitive lacrosse.

The tournament got underway with opening ceremonies, where players were led onto the floor of The Forum by a bagpiper. The team captains then took part in a Indigenous smudging ceremony, lead by Tony Thomas.

In the midget division, B.C. dominated the competition, starting the tournament with three straight shutouts on their way to an undefeated record. The would go on to beat Ontario 8-1 in the finals to win gold. Katelyn Walker led the way offensively, with 18 goals and 16 assists in seven games, nearly double the output of her closest competitor.

There was a bit more drama in the midget bronze medal game between Alberta and Nova Scotia.

The host lost the tournament opener 6-3 to Alberta, but got their revenge later in the round robin with a 6-3 win of their own. That win marked the first time a N.S. team beat an Alberta team in the tournament’s history, showing that the caliber of play in steadily increasing in the province.

Alberta would go on to win the rubber match, 3-1, to capture bronze.

Ontario would capture a much more competitive bantam division crown, defeating British Columbia in the finals by a score of 5-3. Goaltender Chloe Douillette’s performance was vital in their championship run. She won all four of her games, including one by shutout, finishing with a 1.75 goals against average.

Alberta captured the bantam bronze with a commanding 14-1 win over Nova Scotia.

The Nova Trophy most valuable player awards were presented at the end of each game, while the Kobe Apparel All-Star Team was selected chosen at the event’s closing party.