CSS’s Julian Foggitt Getting a Chance to Travel 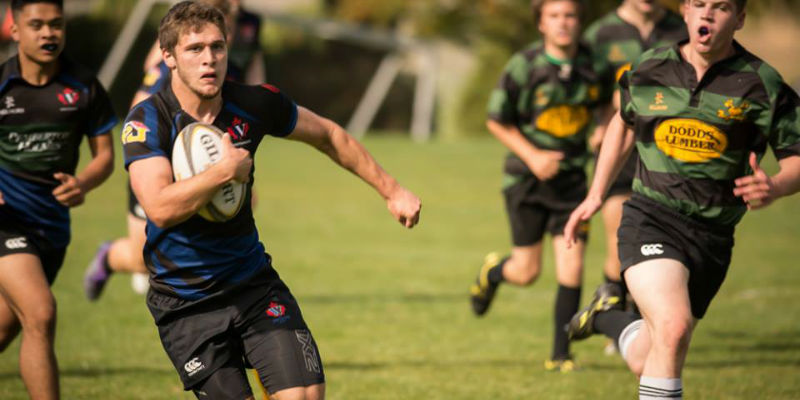 Julian Foggitt was encouraged to give rugby a chance by a friend, Jordy Makela, with the idea that Foggitt’s build and athleticism would translate well to the sport.

Foggitt was primarily into soccer until that point, and while he was a good player, there was one small problem.

“In soccer I’d always get called for knocking people over and stuff, so (Makela) said ‘you know, you can play rugby and you’re allowed to do that,’” Foggitt said, laughing.

“It wasn’t even so much that he was knocking the kids over. They’d run into him, they’d fall down, and he’d get the penalty,” added Steve Foggitt, his father.

After returning from a provincial tournament – having made the team despite being far less experienced than the rest of the players – Foggitt knew he wouldn’t be going back to soccer.

“He was just flying high. It was pretty cool,” said Terri-Lynn, Julian’s mother.

Foggitt was hooked and his skills developed quickly. “I got better and better and now it’s just the sport I love,” he said.

In addition to earning spots on the U17 national team and the Westshore Rugby Div. 1 men’s squad, both 15s teams, Foggitt has played for the BC Elite sevens and is a star on the Belmont rugby team.

Earlier this month, Foggitt got a chance to travel to Colombia as a member of the Dog River Howlers, a touring invitational squad that visits interesting parts of the world in an effort to grow the game, share unique cultural experiences and give back to the less fortunate.

The experience was understandably an eye-opening one for Foggitt.

The wing/fullback got a chance to play soccer with some local kids – his side got “killed” – visit some historical sites and immerse himself in a different way of life.

He also brought down jerseys donated by Belmont secondary and the Westshore Rugby Club, as well as 50 kits, which included water bottles, a frisbee and a notepad and pen, for donation to a charitable organization for kids.

Before every game, the Howlers had to do a sweep of the field and pick up rocks, razor blades and teeth. The stray teeth revealed a need for mouth guards for Colombian players, so Foggitt is hoping he can bring a bunch of those down if he accompanies the Howlers again next year, as he hopes to do.

On the trip, Foggitt was joined by his grandfather, Gord Gustafson, a Campbell River resident. “It’s very rare that he can watch a game with me and it was just great having him down there in Colombia,” Foggitt said.

Going forward Foggitt, who splits his days between Belmont and the Canadian Sports School at PISE in Saanich, wants to pursue a career in sports therapy. He’s hoping to make the U18 B.C., South Island Tide and the U18 national team.

If he’s successful in making the national squad, he could find himself travelling to France, Ireland and Las Vegas for various tournaments.

This past summer, the Olympics included rugby in their lineup of sports for the first time with men’s and women’s rugby sevens events.

Foggitt drew inspiration from watching those tournaments and says it might just influence him to focus on sevens in the future.

“That was great, watching the Olympics and rugby being in the Olympics. It was just a big step for the whole sport,” he said.

Rugby has already taken Foggitt to South America and the young athlete might be travelling around Europe and the U.S. next summer.

And perhaps, down the road, he’ll have a chance to add to that growing list while playing on the grandest stage in sport.