CSS Student to Represent Canada at the Paralympic Winter Games 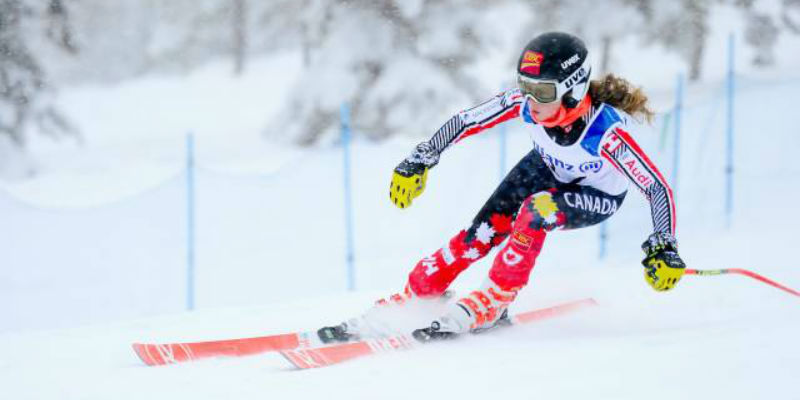 Mel Pemble cried when she first stood on skis as a nine-year old immigrant from the United Kingdom. In a few days, the 17-year-old Saanich resident will be representing Canada as a skier in the 2018 Winter Paralympic Winter Games in Pyeongchang, South Korea, running March 9-18.

Pemble, who left for Pyeongchang Tuesday, will be the youngest of 11 skiers (five women, six men) representing Canada, and only one of two competitors from Vancouver Island.

With less than 48 hours before departure time, much organizing remained, but that did not stop friends and family from throwing Pemble a surprise going-away party at the Thai Lemongrass Restaurant in Cadboro Bay Sunday afternoon.

The 2018 Olympic Games had concluded hours hour, and Pemble was still absorbing the knowledge that she too would be part of the Olympic movement.

“I’m really excited, of course,” she said. “But it is also a sense of relief too. Leading up to the [announcement], it was this constant suspense of not knowing.”

Born with cerebral palsy on her right side following an emergency C-section, Pemble competes as a standing female athlete, who skis with only one pole. (Other categories include sitting and visually impaired sorted by gender).

Pemble will race in all five skiing events: downhill, Giant Slalom, Slalom, Super Combined, and finally, Super G, her favourite event. A long-time fan of the Olympics, Pemble cannot wait to live in the Olympic Village and compete on the same ground as the able-bodied athletes, who just competed in South Korea.

Pemble, for her part, does not see the Paralympics as an after-thought, as they often appear in the media.

“Mainly, I think it’s a lack of education. It is changing though,” she said. Members of the public are becoming increasingly aware, she said. “It’s all about getting the word out that it does exist, and changing that perception,” she said. “It doesn’t bother me, per se.”

For Pemble, wearing the Maple Leaf will also be an opportunity to give back to her adopted home country.

Her mother, Rachel Chubb-Higgins, still remembers when her daughter first stood on skis at the age of 9. “She was terrified of skiing when we first got here,” she said. “I asked for the nicest ski instructor at Mount Washington, because she was in tears.” This person ended up being a retired soldier by the name of Dave Brown. “He was so nice,” she said. Not to mention effective. After twenty minutes of the first lesson, Pemble was skiing down the bunny hill. “After two weeks, he said, ‘she is a bit fast. Do you want to try the adaptive race program?’ What is that? We didn’t even know that existed, and that was the door opener. Weeks later, she came back with a gold medal.”

That all happened, by way, not long after Chubb-Higgins had broken her leg on the same run, while skiing.

“Not long after she started racing, it was pretty clear that she had potential for it, and he had spotted that,” said Chubb-Higgins. “So every time, she has got success, I phone him, and tell him, ‘it’s all your fault.’”

Chubb-Higgins must have racked a substantial phone bill over the years, as daughter has climbed to the top rung of the athletic career ladder. Now, she is about to experience the drama and pageantry of a global event.

This said, Pemble won’t compete in South Korea without some foreknowledge, she had travelled to a test competition in Pyeongchang last year.

“It was amazing,” she said. “I had never been to Asia, so it was definitely different. I have not been on hill with that type of snow before, so it was quite a bit of getting used to. But I am glad I went there, to know what it looks like. I’m not going in blind this time.” While competing, Pemble also witnessed the construction for the games.