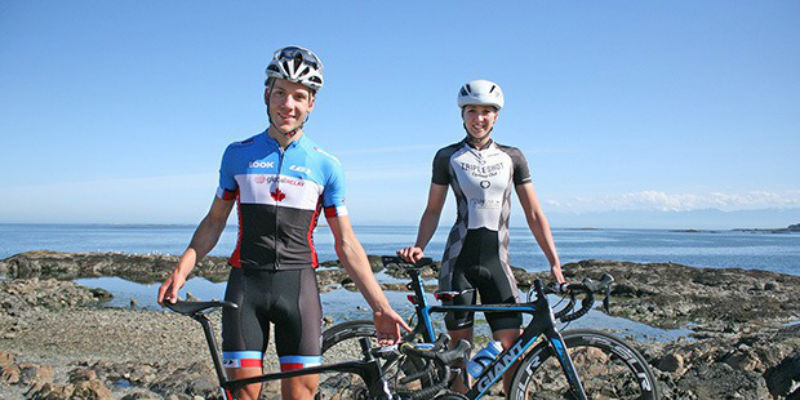 (Milton, ON – April 03, 2016) The Canadian Junior Track National Championships concluded on Sunday at the Mattamy Cycling Centre in Milton, Ontario, with titles awarded in three final events. National champions donned maple leaf jerseys in four categories – Under-17 Women and Men, and Under-19 (Junior) Women and Men.

The final day of competition opened with the Time Trial events; 500 metres for all categories except Junior Men, who raced 1000 metres. Sarah Van Dam of the Tripleshot team added another title to her collection in the Under-17 women, with a time of 38.232 seconds. Julia Gibson (Ottawa Bicycle Club) took silver and Kassandra Kriarakis (Kallisto-FCV) the bronze.

After a brief break to catch their breath, riders were immediately back on the track for the Scratch Races. Sarah Van Dam was again the winner for the Under-17 women while Dawson MacDonald (NCCH p/b Dec Express) took the Under-17 men’s title with a well-timed breakaway attack. Maggie Coles-Lyster won her fifth title of these championships in the Junior Women’s race while Cameron Fitzmaurice took the Junior men’s championship.

The final event of the Championships was the Keirin, held only for the Junior women and men. Coles-Lyster took an incredible sixth title for the women, beating out Amelia Bell (NCCH p/b Dec Express) and Devaney Collier (Team Alberta). In the Men’s race it, to no one’s surprise, Stefan Ritter powering away from the other five riders to win easily his third title, a clean sweep of the individual Sprint events. Adam Lefebvre (Kallisto-FCV) was second and John Willcox (Cycling BC / TaG) third.