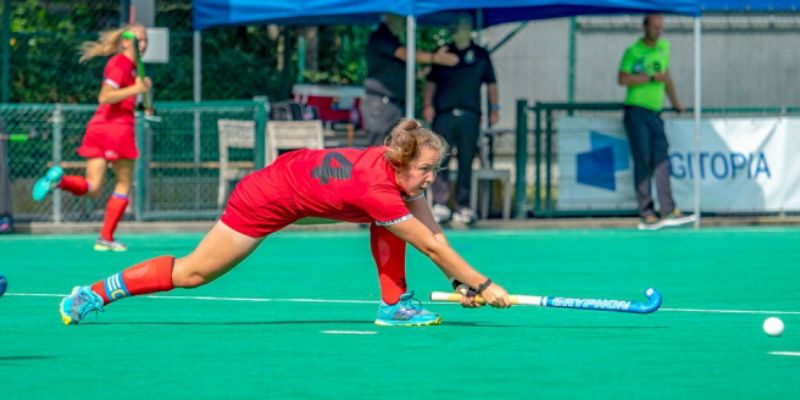 Any time the last-place team produces the most valuable player, you know that performer has special qualities that stand out.

“I think I’m calm and relaxed back there and am a solid defender,” said Alexis De Armond of Victoria, named MVP of the recent Six Nations U-21 women’s field-hockey tournament in Belgium.

Canada was beaten by Netherlands, Ireland, Great Britain and drew against Belgium, India and in a second game against Ireland.

“We were underdogs in the tournament,” De Armond said, “and our defence was under a lot of pressure. I was put into a leadership role as co-captain.

De Armond was so composed on the Canadian back line that the White Star club of Brussels has offered the 21-year-old a pro contract, starting next month.

“I’m really excited to be going over there to play,” said the five-foot-six dynamo.

Especially so since it will allow her to practise with the Canadian senior national players who play pro in Europe, and who gather in Antwerp at regular intervals to train together.

“I was so motivated and inspired when watching the 2008 Olympic trials for Beijing, which were held at the UVic turf field, and I knew then what I wanted to do,” said De Armond, the youngest in a family of three sisters.

“I now want to push for a spot on the senior national team for 2020 [Tokyo Olympics] qualifying.”

De Armond already has 12 senior national team caps and looks ready to make that jump permanently from the U-21 ranks.

Women’s field hockey is far more advanced internationally than its ice-hockey cousin, in which Canada and the U.S. are practically guaranteed the gold and silver medals in every Winter Olympics. It’s a lot more competitive in hockey on turf in the Summer Olympics as Canada looks to qualify for the first time since Barcelona in 1992 when Island players Deb Whitten, Rochelle Low, Laurelee Kopeck, Sue Reid and Milena Gaiga led Canada to seventh place

Canada is coming off its best-ever Commonwealth Games showing of fifth place this year in Gold Coast, Australia, and is looking to the 2019 Lima Pan Am Games, out of which the gold-medallist team stamps its ticket to Tokyo 2020.

De Armond has no shortage of long-ago role models as it was largely an Island-fuelled national team that won two World Cup medals and qualified for three consecutive Olympics from L.A. in 1984, Seoul in 1988 through Barcelona in 1992.

“I had so many great coaches on the Island who had a huge influence on me,” said De Armond.

She attended Mount Douglas Secondary and Canadian Sports School-Victoria, operated by Canadian Sports Institute-Pacific at PISE under the auspices of School District 62. A fellow graduate of the school, Charity Williams, won a bronze medal with the Canadian women’s rugby sevens team at the 2016 Rio Olympics.

“I loved the Canadian Sports School because it is not sport-specific and you were with top athletes from other sports,” said De Armond.

De Armond is part of a promising women’s field-hockey youth brigade that includes fellow Canada U-21 team players Anna Mollenhauer of Victoria, daughter of 1984 Los Angeles and 1988 Seoul Olympian Nancy Charlton, Sara Goodman of Duncan and incoming University of Victoria Vikes freshman Samantha McCrory. They are looking to push for spots on a Canadian senior team that includes Maddie Secco, Kathleen Leahy, Rosie Beale and Lindsay Cole, all of Victoria, and former UVic Vikes stars Kaitlyn Williams and Danielle Hennig. The undoubted leader of the Canadian national team is Kate Wright (nee Gillis), who captains Canada with skill and determination.

“The move has been exciting for me,” said De Armond.

“During our recent U-21 series against Chile at UVic, I looked up and saw faces in the crowd I knew.”

And perhaps De Armond’s face will be one Canadian fans of international sport will in return get to know.