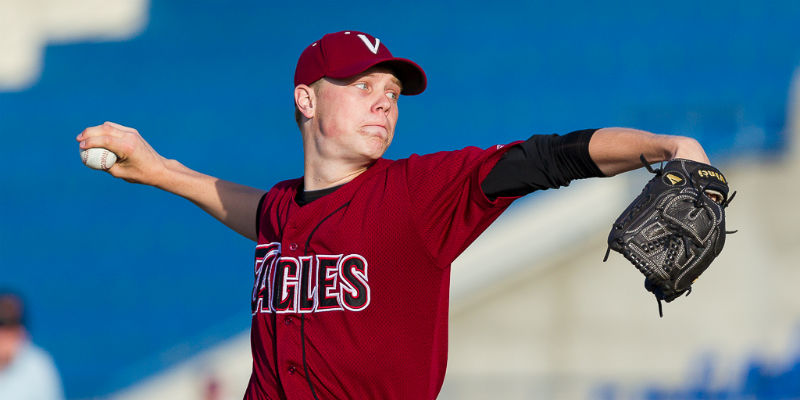 June 14, 2014, Parksville, BC (ISN) – The Victoria Eagles used a no-hit performance from pitcher Ethan Skuija to defeat the Parksville Royals 12-0 in BC Premier Baseball League action Saturday in Parksville.

Skuija’s 11 strikeout performance came in Game 1 of a double-header against the Royals and was kept intact in the 5th inning thanks to a diving catch of a sinking line drive by left fielder Tyler Duncan off the bat of the Royals Andrew Evernden. Skuija’s only blemishes on the day were a pair of walks, one each in the 3rd and 4th innings.

Skuija, who earlier in the season, threw a 1-hitter at the powerful Langley Blaze, moves his record to 3-1 on the season, with an impressive and microscopic 0.70 ERA and 42 strikeouts and just 9 walks over 40 innings of work in total.

Offensively today, Skuija was helped by an Eagles offence that scored in each of the first four innings to lead 8-0 and then added another four runs in the top of the 6th to end the game an inning early by the mercy-rule. Ben Goertzen, Zane Takhar, Alex Hendra-Brown and Kobe Morris paced the offence with a pair of hits each, while a bases-loaded double by Tyler Duncan cashed in 3 RBIs.

In Game 2 of the double-header, the Eagles would score a run in the top of the 7th inning on an RBI single from Hendra-Brown that scored Takhar to escape with a 4-3 win and make a complete game winner out of pitcher Dallas Patterson, who improves his record to 5-0 on the year. Tyler Duncan had a pair of hits, while Brendan Turcotte had a triple and an RBI to help the offence.

With the wins, the Eagles improve their record to 14-14 on the season and they sit in 6th place in the BCPBL just 1.5 back of Vancouver and 8 games back of league leading Langley. Next up for the Eagles are the Victoria Mariners on Tuesday night at 6PM at Lambrick Park, followed by a make-up double header on Wednesday at 12 Noon, also at Lambrick Park, against the Vancouver Cannons.